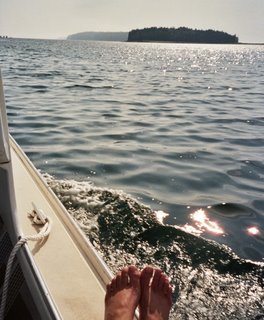 I took this photo on what I didn't realize at the time was the last day of true summer in this part of the world. A friend's boat in September, in the middle of Penobscot Bay, temperature around 78 degrees, and the sun still felt hot. We saw seals sunbathing on the ledges and fog far offshore, waiting for the turn of the tide before coming in to fill the bay. Heaven. And what a contrast to today: cold and rainy and leaves dropping off the trees faster than one could count, if one could bear to do so. Today is just dreary enough that I feel that winter is actually approaching. If not imminent. All the more reason to look at the vacation pictures - although perhaps I should have saved this one until February, when I'm really going to need to remember that day did in fact exist, and a similar one might even come again.

I can't believe I'm going to say this, but I'm between books at the moment. Usually I have three or four going at once, with several (well, many) waiting in the wings. The Joy of Reading had me fired up for a few days, but now in retrospect I'm feeling a bit overwhelmed by it, and deflated in general by the approach of the dark season. I don't think I can face Milton right now, or Henry James. I'm thinking that I need a book containing a lot of light. And even a happy ending. Suggestions?

Comments:
Well, of course, I'm going to suggest visiting the library and borrowing any of Angela Thirkell's Barsetshire novels. This gives me a chance to give one of my favorite sentences of hers (from County Chronicle):

What with the local motor-buses, the long distance motor-coaches, the parked cars and motor-bicycles, enough horse-drawn vehicles to add considerably to the confusion, several bulls which looked though they were not mad, crowds of sheep playing the endless and unprofitable game of trying to climb on each other's backs, cows and calves conversing in various tones, several pigs shrieking for mercy for no reason at all, a loudspeaker which said repeatedly Arshy, booshy, marmsy goggo, or so
Mrs. Morland a devotee of Burnand insisted, and half
Barsetshire queueing at the Odeon for Glamora Tudor and her new lead Crob Doker in the Greatest and Most Smashing World Hit of the Century, Too Close for Love: a Mammoth Scenario of King David's court with a distant view of the Pyramids, a specially constructed model of the Temple five hundred feet high, a gate under which six African elephants passed abreast and a procession of priests carrying the Ark (which bore a remarkable resemblance to an empty black box with the lid tumbling off left over from Hamlet): while Glamora Tudor as Tamar and Crab Doker as Amnon with the muscles of his arms rippling ceaselessly, regretted the fact that marriage between them was impossible because of consanguinity till Zadok the high priest (with obbligato by Handel on the Mighty Wurlitzer) said it was all a mistake and Tamar had been changed at birth, which enabled the producers to make use of
six high priests, ten fakirs. ten bronzes and a band of devil-worshippers, besides six peacocks and two
performing seals left over from an educational film
called Funny Flapper: which would appear to be the end of this sentence."

Sarah, how about Zorro by Isabel Allende? The storytelling is wonderful and will carry you to Spain and California. Allende tells this swashbuckling tale with her tongue in her cheek!

Vicky, what a great idea - I love Allende's writing, and I've had an eye out for this for a while, loving the swashbucklers as I do.

I also realized that I'd LOVE to go to a good library sale. I haven't been buying many books lately, and I always feel somewhat stagnant when the books aren't flowing in and out. And at every library sale I attend, I inevitably find a pile of new books I want to read. Cheap, too.

I. too, am longing for a library book sale! I would love to have some gorgeous new books to dazzle the December shoppers. And some of my books have been on the shelves too long...I'm tired of looking at them!