and now for something completely different

My pals Mike and Dan, otherwise known as the Flannery Brothers, have a children's media company and are currently finalists in the John Lennon Songwriting Contest - congratulations, guys! Their great children's song about collecting is called One Wasn't Enough (we can identify with this, can't we), and I encourage people to listen to it and then register and vote here, under the children's category. Warning - the song is very catchy and it will be stuck in your head for a while after you listen - especially as you look around at all your stuff. Voting continues for the next week only; people can cast one vote per day if so inclined. Good luck, guys - rock on!

why i am not a novelist

A lovely spring day here in Maine. In the morning I went outside to paint for a few hours and it was heaven. I've been struggling for the past few weeks while working indoors, so to be out painting from life again, looking out to sea, was just what I needed. What does this have to do with not writing novels? Nothing, except it had me thinking about creative endeavour in general, and I recently read, back-to-back, Housekeeping (Macmillan 1980) and Gilead (FSG 2004, 2005 Pulitzer-winner) by Marilynne Robinson. They both made me realize that I do not have what it takes to be the kind of novelist I would want to be, were I to be a novelist. (That is to say, the Marilynne Robinson kind.) Holy mackerel, her style and her stories are heartbreakingly wonderful. Beautiful sentences had me thinking, How...? How did she...? Who could think of that...? Of course I was happy to find bookish bits within each novel, too, such as this, from the main character in Gilead (p.39):

"...I've developed a great reputation for wisdom by ordering more books than I ever had time to read, and reading more books, by far, than I learned anything useful from, except, of course, that some very tedious gentlemen have written books. This is not a new insight, but the truth of it is something you have to experience to fully grasp."

Interesting realization about Gilead, after I read it - it takes the same form as another novel I love, Mark Helprin's Memoir from Antproof Case - that of a relatively old man who became a father late in life, running out of time for one reason and another, hence writing down his life history and instructions to his young son, a boy he will certainly never see become a grown man. Thus the story unfolds as the main character decides how much to tell, and when to tell it. Of course there are differences: Helprin gives us a picaresque world-wide adventurer, and Robinson, a quiet home-town preacher. But still, a very interesting way to tell a story.

In Housekeeping, the ending is hard and sad and I'm not sure if I am relieved for the main character or not. Either way, her fate is difficult. But In Gilead, Robinson allows the black sheep character to turn out ok, mostly, and it's frankly a wonderful relief, because I was expecting disaster the entire time, for everybody involved. All in all, it was a pleasure to read a major-award-winning novel I actually love (the past few years I have been underwhelmed, to say the least, whenever I've attempted such a thing).

So there it is. I now know I am not a novelist because I cannot be Marilynne Robinson. Luckily, I am a painter instead. And a writer of - what - something other than near-perfect novels.

I spent some happy hours last week scouring the local used bookshops for more books by Ronald Blythe, and the only thing I came up with was a hardcover first of his anthology The Pleasures of Diaries: Four Centuries of Private Writing (Pantheon 1989). Reading this book has only made me want to read about sixty other books (the ones he liberally quotes from), though I must say that the best parts of the book, for this reader at least, are his mini-essays about each of the diarists in question. And his introduction, in which he writes of himself (p.5):

"I cannot say that I am a diarist, being all fits and starts, inhibitions and sloth. Anyone reading my fragments would smell duty and effort at once. My addiction is to other people's diaries..."

Then again, many of his selections simply slay me. Almost all of them have me yearning for the complete work. Danger! I could end up doing nothing but reading his recommendations for the remainder of the year! Here's an example of what I mean, from the diary of 'Chips' Channon, early-to-mid-20th-century social gadfly and upper-crusty guy made good (p.289):

"19 July (1935). Sometimes I think I have an unusual character - able but trivial; I have flair, intuition, great good taste but only second rate ambition: I am far too susceptible to flattery; I hate and am uninterested in all the things most men like such as sport, business, statistics, debates, speeches, war and the weather; but I am riveted by lust, furniture, glamour and society and jewels. I am an excellent organizer and have a will of iron; I can only be appealed to through my vanity. Occasionally I must have solitude: my soul craves for it. All thought is done in solitude; only then am I partly happy."

That phrase in the book's subtitle, Private Writing, really gets right to me and lures me in. Blythe splits hairs by distinguishing between a diary, written for oneself only, or perhaps to particular person, and a journal, written with an eye to a possible (or certain) future audience, but in the case of this book, I like this distinction. It serves to emphasize the truthfulness of the diarist's experience - I mean an emotional truth as well as the factual, historical truth. Blythe also writes about the compulsiveness and relatively non-narcissistic natures of many diarists, tackling as they do "the Self.... Many are permanently intrigued by being alive and would set down their every breath were it possible." (p.4) Well. The book was a pleasure to read, and it was odd to write afterwards in my own diary/journal about it, transferring my favorite quotations in, the way I always do when I finish a book. Then write about it here, in in another kind of diary/journal. I've kept a written record of my life on and off since I was perhaps ten years old. I've always had a need to download my brain, as it were. It lightens the load, such as it is, considerably. Will anyone else ever read them? I have no idea. I used to call them diaries, then in college an art instructor called them journals - he had our whole class keeping them - he said every serious artist he ever met kept a journal of some kind, and he wanted us to follow suit. I'm grateful for that. It's given me a written record of my own working life, as a bookseller and painter. Not to mention various travails and joys (which usually do go unmentioned in life).

So, the upshot is I now have a list of published diaries to track down. And I'm also in the middle of reading an art book about the British landscape painter Constable. I was tending my book booth at the antiques mall earlier this week, and I realized I had a copy, so I brought it home. Constable, you see, lived right around the corner from where Robert Blythe now lives in East Anglia, and Blythe mentions him frequently in his essays. As my own painting progress is less than stellar at the moment (all fits and starts, inhibitions and sloth), I find I must retreat into art books for some news about other painters. That, and I saw two lovely small Constable landscapes at the museum in Boston last week. So, in the circular and intertwining way in which readers always come naturally to the next books they need to read, I find myself with numerous options.

This blog post has become far too long. I have to go write with a pen instead. But should I call it a diary (good enough for Pepys, good enough for me...?) or a journal (sounds too purposefully upscale...?). Either way, I scribble on.

Back from a few days in Boston. Frankly, I don't know how you city-dwellers do it. All the rush and bustle and hard pavement, all the beautiful people concerned with their clothing and hair and makeup and cars. (Which is not intended to disparage, but rather merely to say I feel like a total and absolute bumpkin amidst all the pretty shine and purposeful hurry.)

Brief highlights of my trip: standing in a certain spot in the Museum of Fine Arts and when I look to the left I see, through a glass door into a long white hallway, a huge Fairfield Porter painting of his sister sitting on the porch in Maine, and when I look to the right I see, in a lighted niche, a massive chunk of limestone from Persepolis, a lion attacking a bull, on loan from Chicago. I was so happy I was humming like a cello string. Another high spot: people-watching at the museum cafe over lunch. The man at the table next to me was elderly, beautifully groomed, impeccably dressed, and resembled no one as much as Peter O'Toole. Eyes not as blue, but still. I tried not to stare, but he was right in front of me.

A third high point - walking into Commonwealth Books on Boylston Street, going directly to the English history section, and immediately putting my hand on a hardcover first edition of Akenfield: Portrait of an English Village by Ronald Blythe (Pantheon 1969, $15). He is my latest reading obsession. A while back a reader of this blog suggested I take a look at his writing on rural living, Anglican church matters, and bookish bits of this and that - he publishes a column in the Church Times - and his first collection of these essays I got in the mail last week, finally, with the same title as his column, Word from Wormingford: A Parish Year (Viking 1997). So very excellent, such beautiful generous prose, in praise of nature, the holy, and the literate. I'm halfway through it already, and now his classic Akenfield is next on my reading list, to be followed by the umpteen other books of essays of his, and hopefully some of his short stories, if I can track them all down. Oh, and I must mention his new book, due out in June in the U.K.: 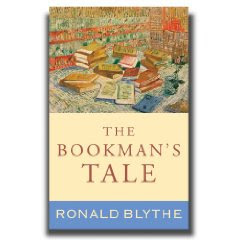 Need I say I am looking forward to this one... Did I mention that Blythe has been an editor for the Penguin Classics for ages? The pleasures of books are all through his essays. In fact, Word from Wormingford: A Parish Year begins with the sentence, "This is the calendar of a Reader who happens to be a writer." I don't know what's better than beginning to read an author one has never read before, knowing that said author has written around twenty other books. So today, I'm back from the city to the country, to watch spring arrive and READ.