A year in the life

A strange anniversary of sorts, today. One year ago this afternoon I was handing over the keys to my bookshop, after emptying it out and cleaning up the final remnants of book dust. It's taken most of this year to get my shop stuff sorted out, and I'm nearly there, despite still having some excess furniture and a few stacks of boxes that refuse to unpack themselves. The books turned out not to be a big problem. Because much of my inventory has landed at the Antiques Marketplace in Bangor, a multi-dealer shop where I rent a booth. I rent space and stock it, the shop is open every day, but I don't have to be there myself. Ideal. Here's one view of my booth: 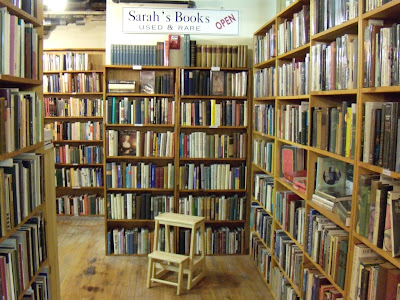 I manage to fit a few thousand books into this space, and sales have been steady, considering my books are mostly your standard run-of-the-mill used hardcovers. (Also considering nearly anything run-of-the-mill can now be bought on Amazon for a dollar. Ho hum.) Another view: 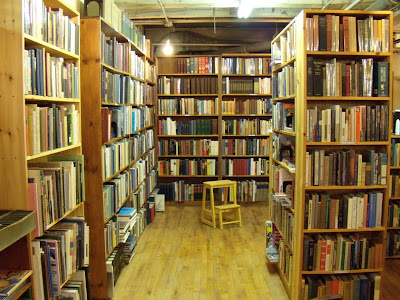 I tend my booth once every two weeks. I take in any new books I happen to have bought, and rearrange things, and tidy up. The rest of the time I almost forget I'm a bookseller, I'm so wrapped up in painting. To wit, what I'm thinking about today, somewhat sadly: one of the biggest surprises of my life thus far was the time - it wasn't an exact day, more like a distinct suspicion that grew undeniable - I realized that having a bookshop of my own wasn't going to happily occupy me for the rest of my life. It came as quite a shock to find out I had other fish to fry. After all, I'd spent the previous twenty years of my life fairly obsessed with all things bookish, so it made sense to me that this trend would continue indefinitely. I don't know what did it, finally. The cost of doing business? A few great years (financially) at the shop, then a few not so great years? An internal imperative to pursue painting full-time? Our moving house, away from Bangor, to the coast? A gradual disenchantment with the book-buying public? The relative boredom of online selling as a way of life?

Most of those things, I suppose. Though I'm not the type to stop doing something just because of some minor disenchantment - I'm much too much of a romantic optimist for that. So I'm still figuring it out. I haven't ruled out the possibility of having a bookshop again someday. With an art gallery attached.

A painter-friend asked me recently what I would be doing with my life if I wasn't a painter. I thought for a minute and couldn't come up with anything else. I'd already been a bookseller, you see...

The rain in Maine stays mainly in the plain

A quick note: last week's island exhibit was a success. The five paintings shown in my previous post: sold, sold, sold, sold, and sold. As well as three others, out of the twelve I had on display. I did lose one game of Scrabble, but then won a few, as well as having the geeky personal triumph of back-to-back bingos in one game: oranges and ravines. A first for me. Now I'm making plans for painting in August, if the weather will only cooperate. More rain falling today. In the midst of thick fog. I ask you.

I'm island-bound again later this week, for a group exhibit with some terrific women I've been lucky enough to go on retreat with for a week each September, for the past three years. We paint, draw, write, eat, laugh a lot, walk, play Scrabble - but mostly just work hard on our own projects. Mine is usually plein air painting around the island. Islesboro is a beautiful place. Here are five of the paintings I'll have in this week's show, which opens on Friday evening at the Islesboro Historical Society: 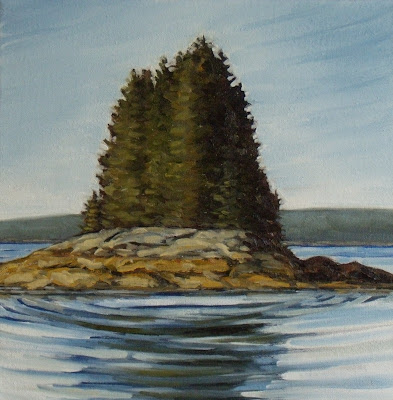 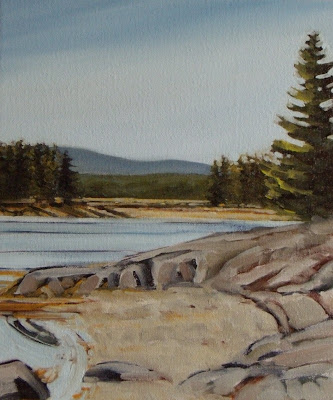 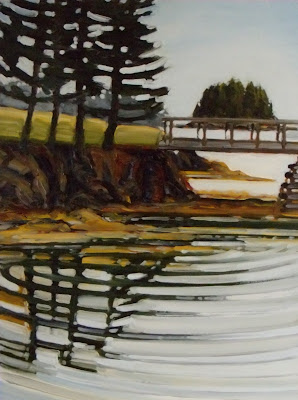 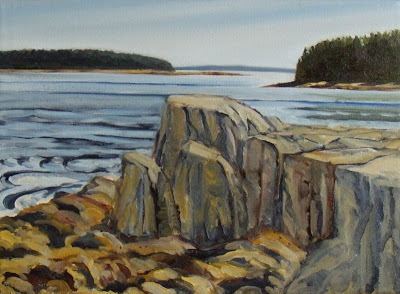 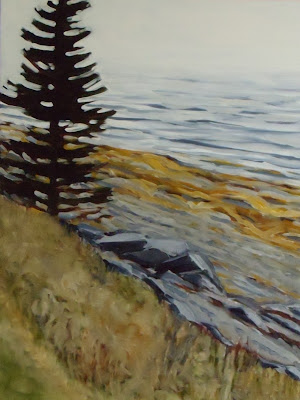 These all measure under 12" x 16", though I am bringing a few larger paintings along for good measure. Meanwhile, on the book front, I'm almost finished reading Diary of an Art Dealer by René Gimpel (Farrar, Straus & Giroux 1966), and it's so good I've blazed through over four hundred pages in what seems like no time flat. Gimpel bought and sold some of the best art the world has ever had to offer, and his diary is gossipy and opinionated and intelligent and generous, and exhibits a deep love for art and artists and sympathy with their endeavours. The sections about meetings with Renoir and Monet are particularly fine, as well as his reminiscences of Marcel Proust, and his thoughts about Botticelli and Vermeer. Gimpel defined the truly great work of art this way: "To survive for all time is to express all the beauty contained in a certain place and in a fixed second of eternity." (p.329) Gimpel, the introduction tells us, retained his sense of honor and serenity even as his health broke in a German concentration camp, Neuengamme, where he was sent after being arrested for his part in the French Resistance. I am dreading the end of this book, knowing what's ahead. Because the writer did not, despite his trenchant political comments, and I want to call out to him across time, to warn him. Impossible and heartbreaking. I read on.
# posted by Sarah Faragher @ 7:02 PM 0 comments

I thought I'd follow up yesterday's post with a few of the paintings I made last week on Bear Island. The first is a small view of the very end of a point I love, looking toward the neighboring island, which I also love, on the only day any blue was to be seen either in ocean or sky: 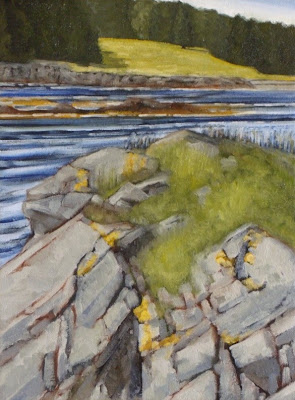 Next, the island boathouse with the very edge of the dock showing over on the left, and the beachstone road heading off to the rest of the island on the right: 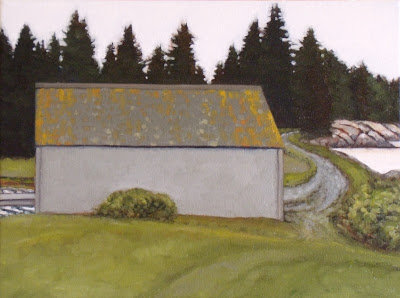 One dripping foggy day so I took refuge on a porch, and painted the view out the screen door. The fog was brightening, and the green outside was very soft and vivid: 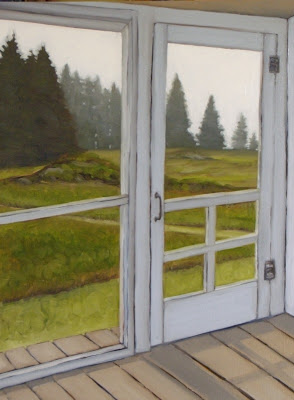 Once the morning rain was so heavy that I was stranded inside for several hours, and ended up painting the interior of my rental cottage. The woodstove, for which I was very thankful, and the view down a step into the tiny camp kitchen: 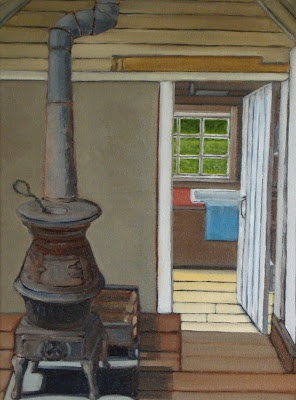 One more, a pocket beach at low tide (inaccessible at high tide, although you can look into it from above). This is part of the beach that used to be one of the island dumps, so the sea glass here is often magnificent. And the blue mussel shells always are. I think of this as treasure beach: 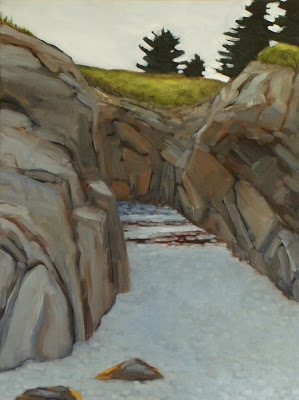 That's it, for now. Before I went to Bear, I finally purchased a digital camera - a nice little refurbished Nikon - it's a gem and is making it much easier to photograph my paintings as I make them. So I'll be adding more folders of work, and rearranging things in general, on my painting website soon.

I photographed a lot of work today, but really, this day was all about weeding the garden. I mean to say, where did those three-foot-high thistles come from? Well, at least the onion tops are also three feet high. I read more Constable, too, as a reward for all the hard work outside. He offers good advice about presenting oneself to the world (p.160):

"Take care that you launch your boat at the appointed time, and fearlessly appear before the world in a tangible shape. It is the only way to be cured of idle vapours and useless fastidiousness."

No fussing allowed, in other words. Be who you are. Advice I've been trying to follow all my life.
# posted by Sarah Faragher @ 6:01 PM 0 comments