...this book-loving thing. Just when I feel caught up, more or less, they keep being published! All the time! Since I don't read the major book reviews much anymore, I don't hear about things I should have found out about about months ago. Still, in that wonderful way books do, what I apparently need to read next somehow manages to pass into my sonar circle while giving off insistent blips. I say all this because there are two recent books I now know of and cannot wait to get my little paws on. First, published last October by the New York Review of Books: 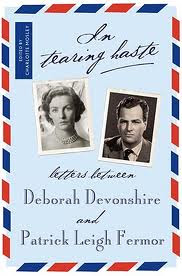 Anything by Patrick Leigh Fermor, anything! Even as I tire of the upper crustiness of the Mitfords, whom, it seems, one can read about endlessly these days if one so chooses, for his side of this correspondence alone I will gladly read hers. Then, if that lovely new publication wasn't enough, how about this, which got fairly poor reviews (after I heard of its existence I sought them out), of which I inevitably think to myself Sour grapes, baby, he had it all and he knew it, he may have been insufferable and opportunistic, but he was also pure gold. Like Patrick Leigh Fermor, give me anything by Bruce Chatwin that I haven't already read and I will abandon all else and set sail immediately. Besides, I cannot wait to read what his wife had to say about him, and vice versa. How vulgar, but how true. Weighing in at a hefty 560 pages long, published in February by Viking: 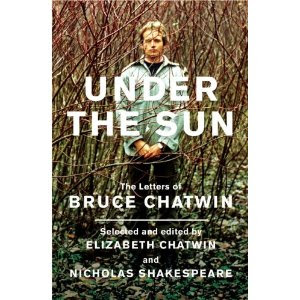 For the most part I have abandoned the quest for modern first editions, but in the case of a handful of authors I have always kept whatever I have been able to find. These two writers are among that group, and whenever I cull my books, I find myself unable to remove a single book of theirs from my shelves. And now I see I'll have to make room for two more.

"It is the misfortune of us painters that we cannot let beauty alone. We are not content to see and enjoy it. Something uncontrollable makes us go out and try to do something about it." - painter Edwin B. Child, 1935. 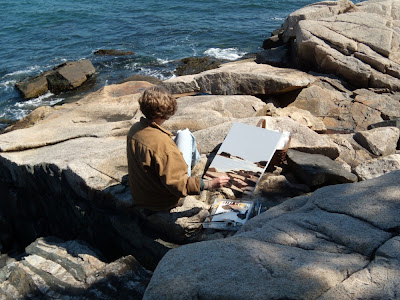 Ryan caught me on camera last week, out trying to do something about it, all this wild beauty of Maine. Rocks, water, trees, islands, light. They never go out of style, in my book. Speaking of books, I'm reading Jim Harrison's essays, collected in Just Before Dark (Houghton Mifflin 1999). What a writer! I mean, he's a WRITER! One you avidly read, and you fervently believe. From his notebooks, a brief bit of advice that could easily apply to painters as well as poets, or anyone, really, engaged in an endeavor worth pursuing:

Books that Matter for People Who Care

One of my favorite local bookshops, Left Bank Books, holds a series of winter and spring Sunday afternoon talks on varied themes, given by all sorts of bookish speakers, complete with sherry and cheese and crackers. They call it their Lyceum. Most civilized. This past Sunday it was my great pleasure to go there and meet and listen to publisher David R. Godine, whose recent catalogue celebrates his company's 40 years in the book business. The bookshop is tiny and the crowd easily filled the chairs and aisles. A powerpoint presentation cast large images of fine press books and trade titles high up on the wall, as David spoke about his early years as a letterpress printer, the move to offset printing, and life as a discerning publisher determined to print quality books, books that are simply great and deserve to be in print. He learned to print on a Vandercook Proof Press (me, too!) as a student at Dartmouth, set up his publishing operation with a Kelly 3 Press in a dilapidated old barn in Brookline, Massachusetts, and proceeded to spend several decades producing Books that Matter for People Who Care (his publishing motto, and what a fine one it is). A few notes I took during his talk:

His favorite Godine book, in his top three at least, is Moral Reflections on the Short Life of the Ephemeron by Thomas Boreman, 1970, with hand-colored illustrations of great delicacy, suited to their subject, the mayfly. (Want, WANT.)

His favorite typefaces are in the Bembo/Minion/Garamond family, "because they're elegant," and he also loves the Scotch faces like Miller and Bell, "heavy and gutsy." He doesn't like sans serif types; he doesn't think people are comfortable reading a whole book in sans serif.

An audience member questioned him twice about the future of publishing. He said he gets depressed when he goes into most bookshops, but we're very lucky here in New England to have the number of independent bookshops that we do. He said, "I can make a living in New England. But Mississippi - three bookstores in the whole state - forget it."

On book-reading devices (such as the Kindle, though he didn't name it specifically), he speculated that in the future such things will not be treasured or even be able to be used. They will be obsolete as pieces of technology, replaced by some other thing. Not so the book, which was perfected in its essentials many centuries ago. (Oh, how I agree! Kindle - it's a piece of plastic, people. Not something alive in your hands, warm, made of wood and paper and cloth and imagination and mind and heart and soul. Fine for best-sellers, perhaps, and genre fiction, textbooks, but anything else...? But I digress.)

Despite saying that the next ten years would be difficult ones for the book trade, which is changing so rapidly it's hard to chart what's happening now, much less predict the future, he ended his talk with a note of optimism, quoting from Kenneth Clark's series Civilisation (and I now see that Clark was quoting Ruskin, in saying "Great nations write their autobiographies in three manuscripts, the book of their deeds, the book of their words, and the book of their art. Not one of these books can be understood unless we read the two others, but of the three the only trustworthy one is the last."). David Godine elaborated thus:

I could go on and on. Do me a favor - browse Godine's wonderful backlist (and their frontlist too). If you're anything like me, you'll recognize many books you already own. I could recommend many of their titles on cookery and gardening, but a good place to start is with the wonderful selection of books about books, and the 40th anniversary poster, hand-silkscreened, showing Godine himself with a composing stick in hand. The sidebar quote tells us that the poster commemorates the time in which:

"The narrow, personal world of trade publishing was still run by opinionated individuals, whose names were often eponymous with their companies, and who more or less published what they liked and did their crying in private..."

Wow, a blizzard is raging here in Maine this morning. Just yesterday I was beginning to become accustomed to the sight of bare ground once again. We had snow lingering only on the shady side of the street and the crocuses were all in bloom. I don't know if this will do them in or not, I suppose tomorrow will tell. Apologies for the lack of writing lately - as spring lurches along here I have been less inclined to spend time in front of small glowing screens of any kind. I've been out painting a handful of times, also out surveying the bare garden and drawing maps in my head of where new vegetable beds could go. And out walking, out book-hunting, all in all simply OUT. With some impatience and much great joy. What a long winter it was, to be sure.

Noteworthy from the past few weeks, in no particular order (though first is best):

Celebrated 19 years with Ryan. His anniversary gift to me: The Letters of Samuel Johnson, edited by Bruce Redford, complete five-volume set, fine in fine dust jackets (Princeton University Press 1994; the Hyde Edition; lovely presswork from Stinehour). He knows what I like! Read on!

Chuckled over The Future of Books at McSweeney's. Laughing aside, they also provide some welcome information about what's happening to reading and literacy and publishing, in their series Good News from the World of Books.

Delivered one of my paintings to the Portland Museum of Art for their upcoming biennial, which opens next week. Commenced fretting about what to wear to the opening. It's been a while since I've had to wear something other than what I usually schlep around in. You know, clothes with tiny flecks of paint on them - fraying comfortable clothes - old bookshop clothes.

Contemplated Maria Shriver's interview with poet Mary Oliver in the O Magazine online edition. Going to see and hear Mary Oliver read from her work several years ago remains a literary highlight in my life. Actually, forget literary, the experience remains a highlight, full stop. The reading took place a year after her life companion had died and it was obvious that the loss was raw and painful. Good to read this interview and see what's happened in her life since then.

I'll leave it at that for now - the power is flickering and I keep getting disconnected. As the storm rages on, I'm going to go curl up and connect with a book instead.