Before I get into several books by famous song hunters John and Alan Lomax, I want to first mention this little gem, just-read, from my own collection: 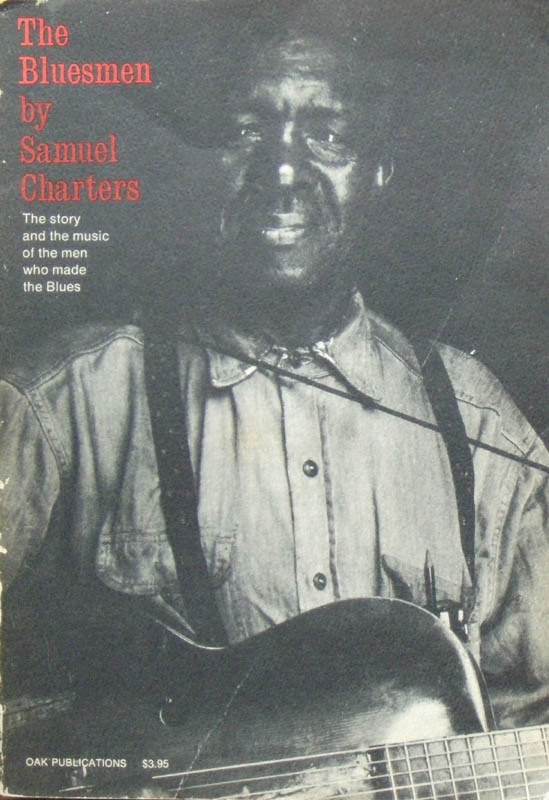 The Bluesmen by Samuel Charters (Oak Publications 1967).  I bought this slightly shabby softcover copy a few years ago at a local book barn for five bucks.  The aforementioned Peter Guralnick cites the work of Samuel Charters as influential when he himself first became fascinated with singers of the blues (and when old, still-living blues singers from the earliest days of recorded music were being rediscovered during the folk music revivals of the sixties).  Reading this book I can see why.  Charters spent the fifties and sixties recording blues and jazz artists and talking with and writing about them.  I don't have any of his other books, but this one is pretty darn great.  It has chapters on the blues of Mississippi, Alabama, and Texas, with sections on Charley Patton, Son House, Skip James, Robert Johnson, Blind Lemon Jefferson, and others, with lots of lyrics and musical notation, as well as first-person narratives from the singers or those who knew them or knew of them.  Great information throughout, and I appreciate Charters's writing style, although it's not as accessible as Guralnick's (being more impartial in a scholarly way).  I particularly like his straightforward description of what, exactly, constitutes the blues (pp.90-91):

"The usual pattern for a blues is a group of verses loosely held together by an underlying emotional concern.  Most of the verses are standard textual material, usually general comments tied to the particular situation that the singer has described."

Isn't that cogent?  When listening to blues singers (simplifying wildly here), sometimes it's hard to figure out why they are so good - with these repetitive lyrics that seem simple or pat - and yes, it's that underlying emotion that sweeps through the song like a river in flood and carries you along with it.  If the singer is really good, the emotion is often so strong that it almost doesn't matter what the lyrics are.  I've had a boxed set of the Harry Smith Anthology of American Folk Music for a number of years now, and in some of my favorite tracks (blues, country, folk, gospel) the emotion carries everything.  I mean, they are so hair-raisingly good that your flesh creeps.

But back to Charters.  In the introduction (p.10), he says that by the time he and others got serious with their research into the blues, "...it was too late to do much more than trace the earliest sources and forms of the blues, but it was possible to learn some of the patterns of change and emphasis as the blues has moved - in less than sixty years - from rough field singing to the contemporary Chicago blues band style."  That's what he goes on to do in this book.  The results are fascinating and again had me making notes of songs to find later.  The book also has some wonderful photographs by Samuel Charters's wife, famous beat scholar Ann Charters, and illustrations of early record company advertisements (for what were called at the time "race records") and sheet music.

After all that shall I leave you with a song?  Even though Charters barely mentions him, how about Mississippi John Hurt's smooth rolling version of the ballad of Frankie and Albert, recorded in 1928, and anthologized in 1952 by Harry Smith in his Volume I, Ballads.  It purls along like a gentle stream, not a raging river, and I do love it so.

Comments:
Gotta love Mississippi John Hurt; I remember driving around in my old car- 68 Plymouth Valiant- listening to him on the eight track.

It's been fun hearing about your reading the blues.

Hi Dan, thanks for that vivid memory, how wonderful! In Peter Guralnick's book "The Listener's Guide to the Blues" there is a nice section on Hurt, here is a bit of it (p.20):

"...Hurt's music, and his whispery bullfrog voice, retain a winsomeness almost foreign to the blues and were almost certainly part of the reason for his enormous popularity in folk circles between 1963 (when he was 'rediscovered') and his death in 1966. Hurt was himself bemused by his own popularity; he couldn't understand what all the fuss was about. And that, too, was part of his charm, and part of the charm of his music."

My second favorite Hurt song has to be his Salty Dog Blues. (https://www.youtube.com/watch?v=HyAKNRmB2B8)

After reading your last two posts, I had no choice to go down in my basement to check out my music books. I have Lost Highways and the two Presley books, but the G books in my collection are on the bottom shelf of a bookcase with other music books and boxes of 45s for my juke box piled in front of them. May have some of his other books. Many of the LPs you mentioned are on a nearby shelf. I know they are there even if I never play them. Somewhere in a box are a bunch of old Sing Out magazines. Back in the 1960s and 1970s we had very left-wing bookstore in Winnipeg called the Co-op Bookstore and the manager used to bring in Pete Seeger, The Weavers, Odetta, etc. for concerts. At a small club I saw Brownie McGhee and Sonny Terry and other blue singers so whenever I come across a book about any of these people I buy it. I will have to read Lost Highways one of these days if it's as great as you say.

Hi Kent, thanks so much for your great comment! May I say I find it thrilling that you have a juke box! I am without a way, at the present moment, to play any of my 45s, lps, or cassettes, but I have kept most of them for sentimental reasons. I think I will be buying a turntable soon and getting all that vinyl I own out of the cupboard it's currently languishing in.

Yes, read "Lost Highways" - I know when I talk about books I've just read I tend to be overenthusiastic, but just the fact that this one is still print after all this time should tell you something.

I will be writing more soon about Pete Seeger. My mother recently told me that our family went to the first Clearwater launching, but I was so young I don't remember it at all.