and now for someting completely different?


In a word, no.  As usual, summer lurches along too quickly.  I go to library sales and buy boxes of books and read, I go to beloved places on the gorgeous coast of Maine and paint. I do various and sundry other things located all along the spectrum between these two poles of happiness. 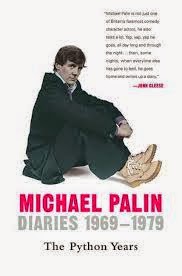 But about the Monty Python reference.  Short story long.  Last weekend we went to a book sale almost against my will (far away, hot day, dwindling funds).  In retrospect, really, instead of complaining about transitory circumstances, I should know by now to just give in to destiny and go, already.  I always find something wonderful, I always enjoy myself, and this day was no exception.  We bought two cartons of books for just over a hundred dollars.  I refrained from telling the hard-working volunteers at the checkout that I would have purchased twice as many books (at least) had the prices been just a bit lower.  I cannot buy a softcover book for two or three dollars and hope to make any profit on it whatsoever.  I did buy a lot of softcovers for a dollar each, and many hardcovers for two and three dollars each, and even one book for thirty dollars.  Several to read (read-and-keep and read-and-sell both), including the one pictured here:  Diaries 1969-1979 The Python Years by Michael Palin (St. Martin's Press 2007).  Over six hundred pages long and I'm over halfway through and just ordered the next volume.  And, oh joy, I see that volume three is due to be published early this fall.  Exactly what I love to read most - an inherently interesting person's diaries, and many volumes of them at that. This first is turning out to be such a treat, it has everything, with great writing throughout.

Speaking of which, one thing struck me early on - how, in the manner of the best singer-songwriters, the Pythons, particularly Palin, spent days and days writing and rewriting their own material, then performing it too.  They are the whole package.  I grew up watching the original series on our local public television station, saw all the movies too, and had friends who could quote long segments of dialogue.  But I never put it all together (duh...) that these ridiculously funny people on the screen WROTE everything too.  This diary tells us all about it - days and days of writing, exchanging pieces of scripts, reading aloud and cracking each other up during meetings of the whole group.  As the Diaries go along, who was responsible for what becomes clear.  And conflicts within the group are not absent or glossed over.  All the Pythons have their own projects as well as attitudes about dealing with the group's rising fame.

It's not just a show-biz memoir, however.  Far from it.  It's a real diary.  And before I noticed that (again with the duh...), I actually wasn't sure I wanted to even read it. I mean, I like the actors and the group and the whole thing, but reading about them isn't on my life list by any means.  But then I saw the photos of Palin's actual diaries on the endpapers of the book.  And read the introduction (I may have even been standing at the biography table at the book sale while doing so, and thinking, Do I want to read this?).  The first sentence of the introduction tipped me over the edge (p.xix):

"I have kept a diary, more or less continuously, since April 1969."

*happy sigh*  I kept reading the introduction, and he says this about diary-keeping (p.xx):

"There are times when I've resented the whole process, when I've felt lumpen, dull and inarticulate, when detail has slipped away and the whole exercise has seemed completely pointless.  But the longer I've kept the diary the more inconceivable it has been to abandon it."

As an inveterate diary-keeper myself, I feel likewise.  I'll mention one more bit, just because I can - his entry for December 31st, 1971 begins (p.65):

"Harold Nicolson used to sum up his year on December 31st with a few pithy words.  It's a sort of diary-writer's reward for all those dull July 17ths and October 3rds."

I love the dull bits and all the others too, they complement each other.  After all, life is made up of quiet moments at the desk and not-so-quiet moments in the spotlight, although the ratio and magnitude of these things certainly changes from person to person.  Like all great diaries, Palin's are of their time and they are timeless.  One person, taking note.  Of home life, his wife, the birth of their children, his parents, his father's illness and death, books he's reading, places he goes, food, friends, politics, the weather, and oh yeah, writing and acting for television, film, and stage, with cameo appearances from everyone you'd expect and some you wouldn't.  Serious, funny, and everything between.  Endearing, too - such as this, written immediately after a few uncharitable words regarding one of the other Pythons (p.22):