As the new year draws ever-closer I find myself reluctant to add to the various best-books-of-the-year lists out there.  Instead I've been mulling over what my own ideal bookshelf might look like, after reading and admiring Jane Mount's paintings of other people's, in the aforementioned My Ideal Bookshelf (Little, Brown 2012; please revisit my post from mid-November for more about this fascinating book, which I read and loved and wished was much longer).  I even took some notes on the subject a few weeks ago, when I was sorting and pricing some books in the book room.  Copious notes, in fact.  But then, sitting by the Christmas tree this weekend, I realized I could easily answer this question using one of the photos from my last post.  The row of living room reading, by the chickadee.  Here it is again, a little closer: 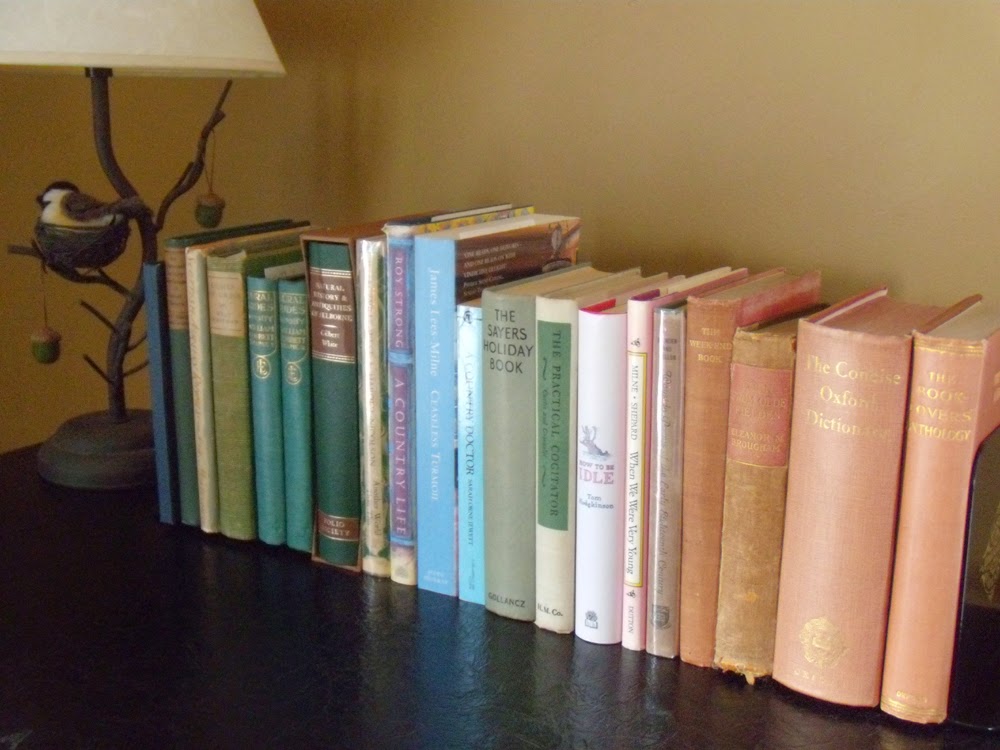 It's very, verrry close to what my ideal shelf would contain.  Several titles stand in for whole genres of reading interests.  A few all-time favorites rub shoulders with acquaintances I admire but wouldn't take to a desert island with me - if I had to choose - but we still remain life-long friends nonetheless.  From left to right:

Gentle Manners: A Guide to Good Morals - a facsimile edition of the 1823 edition (Shaker reprint from Canterbury, N.H. 1978).  I'm still interested in being good.  Work in progress.

Leaves of Grass - Walt Whitman (Small, Maynard & Company 1897).  An old friend, this edition.  It's traveled with me for about twenty years now.

Rural Rides - William Cobbett, two volumes (Everyman edition, J.M. Dent 1925).  I think I was reading this set when I first began this blog.  As you can see from the bookmark in volume one, I haven't finished it!  Yet...

Another World Than This... - an anthology compiled by Vita Sackville-West and Harold Nicolson (Michael Joseph Ltd. 1945).  Gosh what a gem of a book.  Read their war-time writings then turn to this anthology for words of sublime solace and beauty, as they must have done while compiling it.

A Country Life - Roy Strong (Pavilion 1994).  I love this memoir but I love Ronald Blythe's even more.  However, Blythe gets his own entire shelf, upstairs in the book room.

A Country Doctor - Sarah Orne Jewett (Meridian Classic 1986).  I own very few mass-market paperbacks but came across this one and kept it, since I have no other edition of this lovely, quiet, autobiographical novel.

The Sayers Holiday Book - a Dorothy Sayers omnibus (Victor Gollancz Ltd 1963).  Gaudy Night, Strong Poison, and In the Teeth of the Evidence (seventeen stories).  So great is Gaudy Night.  SO great!

The Practical Cogitator, or The Thinker's Anthology - selected and edited by Charles P. Curtis, Jr. and Ferris Greenslet (Houghton Mifflin Company 1945).  An old favorite.  How I love anthologies, can you tell?

How to Be Idle - Tom Hodgkinson (Hamish Hamilton 2004).  The jacket flap tells us this book is "...a spirited and joyful defense of laziness and good living."  By the founder of The Idler - 'nuff said.

When We Were Very Young - A.A. Milne (Dutton reprint 1988).  "Disobedience" is my favorite poem in the book.

Wayside Poems of the Early Eighteenth Century - an anthology gathered by Edmund Blunden and Bernard Mellor (Hong Kong University Press 1964).  Another beauty of a book.  I cannot resist a book with a title such as this.  (I don't even try.)

The Week-End Book - no editor noted (The Nonesuch Press 1927).  Browsability at its finest.

Corn from Olde Fieldes: An Anthology of English Poems from the XIVth to the XVIIth Century - edited by Eleanor M. Brougham (John Lane, the Bodley Head n.d. circa 1910?).  Yet another anthology. They are perfect for a brief look-into, whenever that's all you have time for.

The Concise Oxford Dictionary of Current English - adapted by H.W. Fowler and F.G. Fowler, fourth edition revised by E. McIntosh (Oxford University Press 1952).  One of the many Oxford dictionaries in this house, but all the others are dark blue.

About that last title, as our editor tells us in his preface (p.v):

"There is a wide circle to whom this collection should appeal, in addition to the bibliomaniacs or mere collectors of first or rare editions to whom the contents are often anathema, for the love of books is not confined to scholars or great readers.  This love is incommunicable: it comes, but happily seldom goes, as the wind which bloweth where it listeth; it is perfectly sincere, and knows nothing of conventions and sham admirations."

Picked out and placed there when I rearranged the living room a year or two ago, that's my row.  It's held in place with reproduction Boston Athenaeum bookends, a gift from Ryan several years back.  He knows just what I like: 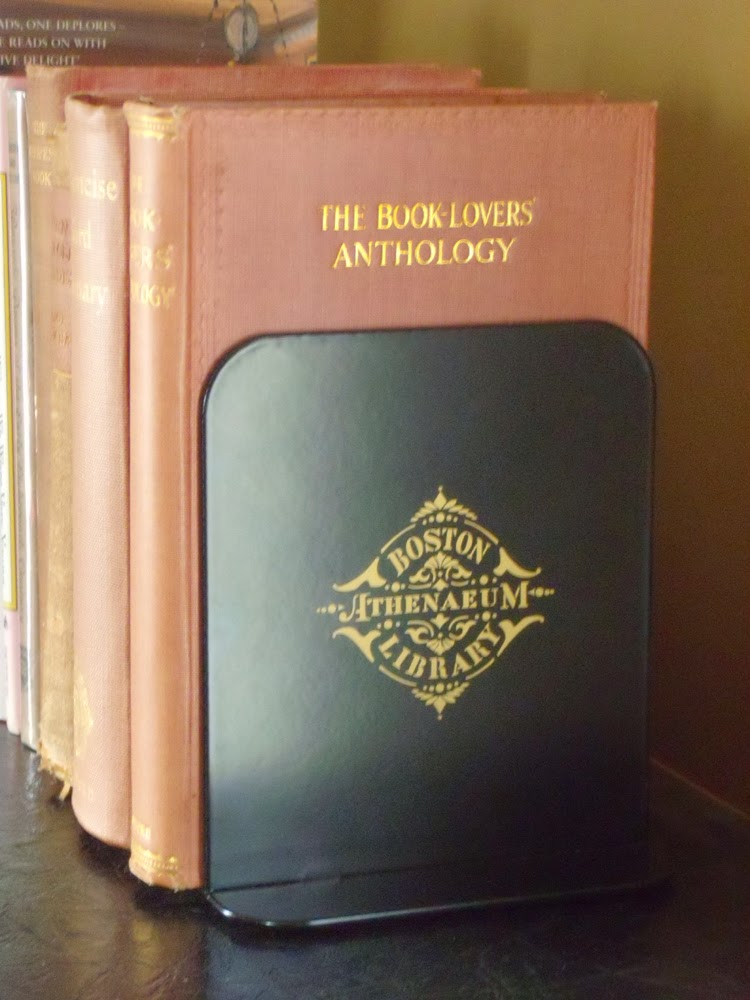 That's it then, an ideal bookshelf.  My problem, if it could be called such a thing, is that similar rows of books exist throughout the house.  Filling entire bookshelves (usually topically! often alphabetically!).  In which every shelf holds old friends alongside particular beloveds and worthy future reading.  Who would I leave out?  Just leave off my ideal bookshelf, willy-nilly?  The Samuels (Clemens and Johnson)? Lord Byron, Jane Austen, Laurie Colwin, Mark Helprin, Ronald Blythe, Mary Oliver, Bruce Chatwin, Louise Andrews Kent, Christopher Morley, Patrick O'Brian??  Tintin?  Patrick Leigh Fermor? The Secret Garden?  Elizabeth and Her German Garden?  Dave Eggers? Montaigne?  And what about my art books...!  Impossible to choose my very favorite favorites from among them all.

I say that, but one book does comes to mind.  I've mentioned it before, over the years.  This one truly did change my life.  John Carter's immortal ABC for Book Collectors (my old edition was the buff-colored hardcover from Knopf; it's been updated and reprinted by Oak Knoll).  It opened up a world for me, one I would inhabit for years.  Come to think of it I live there still.  Happy New Year, from the land of books.

holidays around the house


All my ancient literature reading plans seem to be on hold.  The Aeneid, Moses Hadas's Ancilla to Classical Reading, and The Norton Book of Classical Literature, edited by Bernard Knox, are all hogging prime real estate on the bedside table.  With stacks in the hinterlands of the book room, waiting.  But I've been forgoing them all for new stuff, since I keep wandering into bookstores (and lingering over Patrick O'Brian still, too, not wanting the series to end, even as I know it will).  In the last few weeks I've read brand new books by Mary Oliver, Anne Lamott, and Maira Kalman, and read brand new-to-me secondhand books by Jonathan Lethem, William Plomer, and Paul Monette, ditto books about David Hockney, Picasso, and Beatrix Potter.  They are mostly wonderful, but I must forgo full reports for now, since not only did I pound my thumb quite dreadfully with a hammer, while putting a tarp on the woodpile, I also drilled it with a drill bit while framing paintings, and I cannot easily hit the space bar on my keyboard at this time.  In short, typing hurts.  So I will merely send out my best wishes for a warm and cozy holiday season, along with a few pictures of same from around our old Maine house. 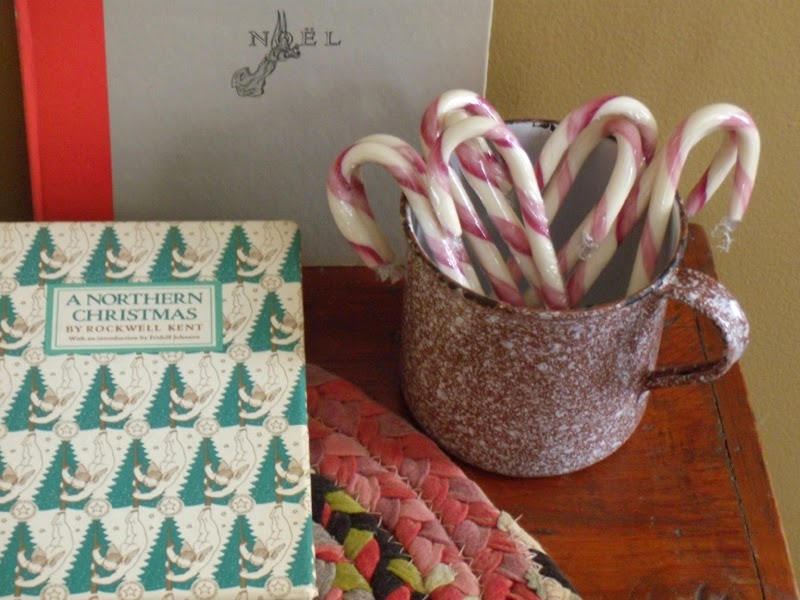 Every year I take some favorite Christmas books off the shelf and let them see the light of day for a few weeks.  The Rockwell Kent book is a new addition this year.  As is this vintage Mrs. Tiggy-Winkle figurine - she seemed to be calling for some candy canes, too.  Happy to oblige: 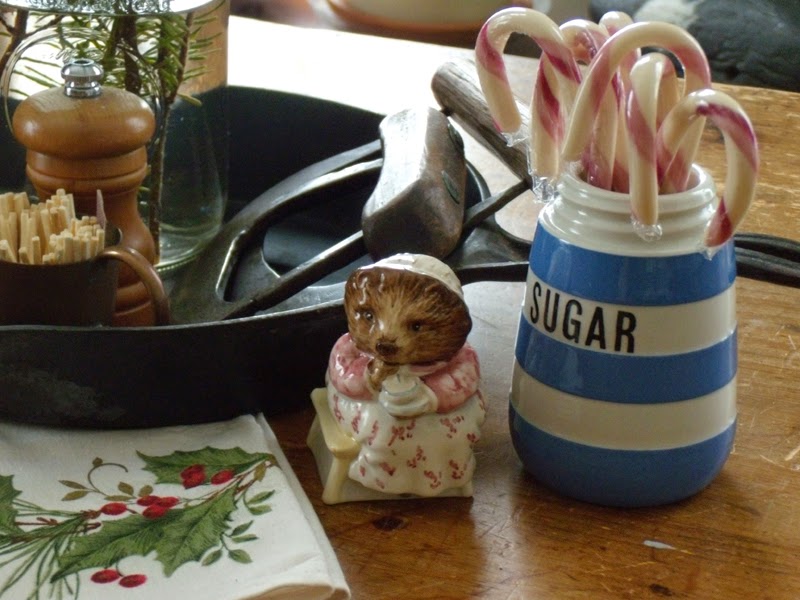 Our Christmas tree has many birds on it.  Just one in the nest on the lamp, though, a felt chickadee, resting near a row of living room reading, atop the printer's type case that used to hold court in my bookshop: 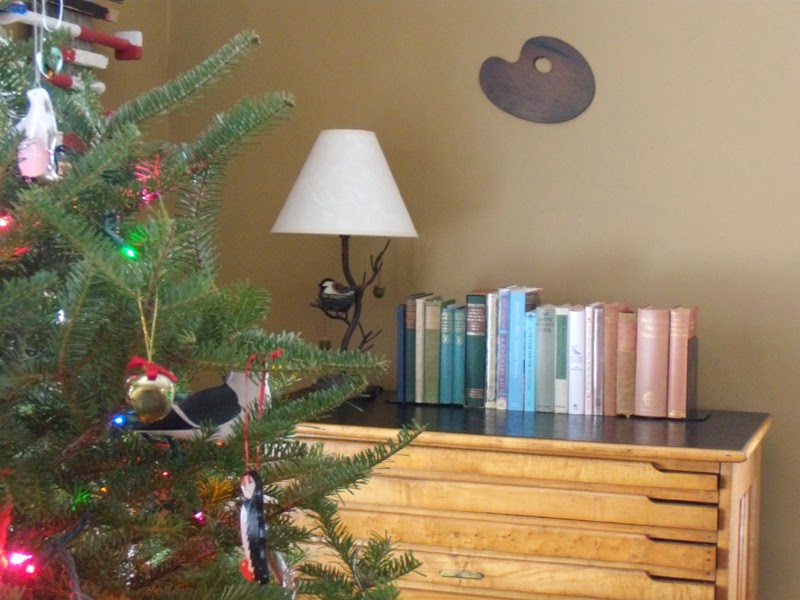 We had some extra strings of lights this year so I tumbled them across the top of the dresser where we put up holiday cards as they arrive.  Can't have enough light around during this dark solstice week: 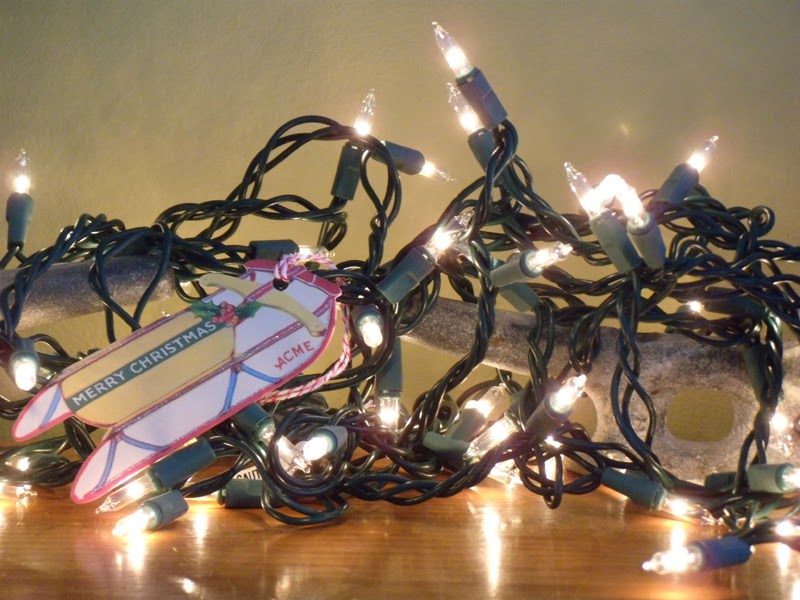 Until next time, when I hope to be less accident-prone and more verbose: wishing you a Joyeux Noël dear friends, and peace in the new year.

from one holiday to the next


December arrived so quickly this year, holy crackers what happened?  Must've been the three big snowstorms we had here.  They tend to keep one focused on the present moment quite nicely (I wrote icely at first, which seems appropriate), as survival instincts take over and time bends strangely.

Speaking of time, I have not had much to spare today, but since it's the first of December I wanted to make mention of the tradition of advent calendars.  I've always loved their little windows of hope, small surprises, daily treasure.  They remind me of pop-up books, with their ingeniousness and general spirit of invention.  I remember one from childhood that even had tiny edible treats behind each door.  Another favorite had little toys.  And for the past few years I've used this gentle one, from Maine artist Anne Kilham.  It reminds me of long ago, and of the old Maine houses I love, and winter fields, and the quietness of the season, as we approach the winter solstice and Christmas time.  I don't mind using the same advent calendar from year to year, in fact it feels appropriate, in the way that unpacking beloved ornaments does.

However, a few days ago Ryan and I found ourselves at a bookstore (two bookstores actually, but who's counting), and after we each cased the place we met in the middle and he was holding this.  I said, "Ohhh but we already have an advent calendar."  (Longingly.)  He said, "But we need this one too."  (In a voice that means No debate.)  So it came home with us, along with - need it be said? - several books, and tonight we will open its first door and see what sweet bookish item of note the good people at the Bodleian have chosen to share with us.  I will still use my old calendar too, no worries there.  I'm set in my ways, and besides, I'm still giving thanks today and both of them will serve as excellent reminders to keep right on doing so, as we move ever more steadily into winter.