"This is a diminutive letter, but you excuse duodecimos in summer."  From Volume IV of The Letters of Horace Walpole (p.2).  This post will be necessarily short as well, since I am preparing for one of my annual painting trips.  Art supplies yes, but what to pack for books?  The question looms.  More Walpole...?  This Walpole shelf houses the set I am slowly reading my way through.  As you might guess from this picture, I am in the midst of Volume IV:

And it is absolutely riveting!  I have no time to get into the details, but will say that the letters amble quietly along for a while, then BOOM, all hell breaks loose!  (Okay, okay - Walpole's beloved cousin gets kicked out of the army and out of parliament, and Walpole defends him, and the ensuing letters and Walpole's own footnotes with all the backstory - very meta indeed - kept me reading late into the night - I know this sounds dry as dust, but not so! trust me!)   But, back to packing for my trip - do I want to drag Walpole off to a tiny island where I won't be doing much reading anyway?  And, then, there is this to consider - the seven cartons of books we bought at the village book, plant, and bake sale last weekend includes the following, which have somehow formed my next to-be-read, or at least to-be-browsed pile: 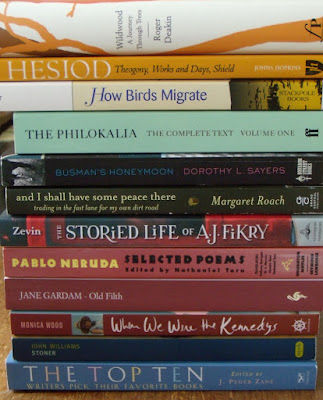 There are some tempting diversions in this stack - new reads and re-reads both!  Thus I am experiencing an internal struggle - a literary tug o'war - about whether or not to allow any of these books to derail me from the Walpole set before I'm even at the halfway point.  A slippery slope, to mix metaphors.  I'll confess that I've already read one book from the booksale - this shabby charmer: 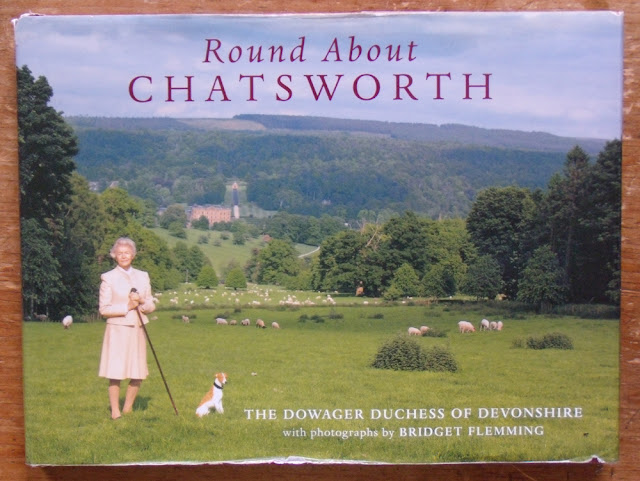 Round About Chatsworth by the Dowager Duchess of Devonshire (Frances Lincoln 2005), aka Deborah Mitford.  Such a pleasing little picture book, illustrating long walks from the main house to each of the points of the compass, in all seasons, replete with quirky landmarks, outlying cottages and farm buildings, and generally gorgeous English countryside.  The Dowager Duchess has opinions about historic preservation and bureaucracy and doesn't hesitate to share them in her to-the-point text.  Not that she's acerbic, exactly, I mean, look at her, there on the back cover: 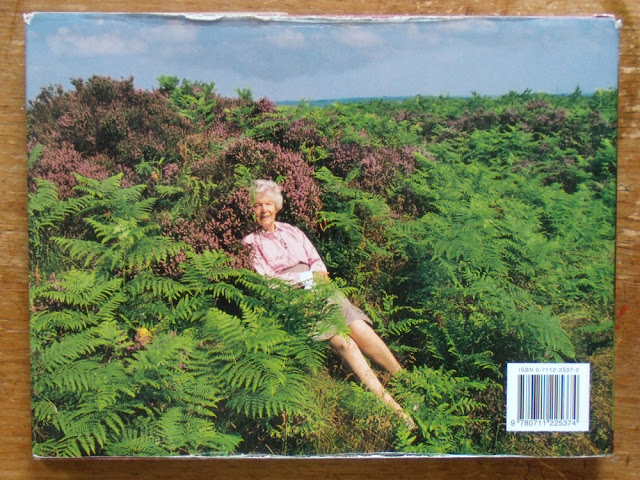 But she does have decided opinions, based on hard-won experience.  Isn't she dear, in the bracken?  I remind myself that reading her book was not, in fact, straying far from Walpole at all, since he himself visits Chatsworth in Volume III, and gossips about the Duke of Devonshire and many other Cavendishes all throughout his letters.  One of his female relatives also married a Cavendish, come to think of it.

Well, I remain undecided, although I'm leaning toward packing Volume V and my diary and calling it good.  The other books will wait for me, I hope.  As I continue to get ready for my trip, I'll close with a bit more from Walpole (Volume IV, p.102):

"I always find it worth my while to make journies, for the joy I have in getting home again."


Last night I made inroads with Volume IV!  Shall I mention a few things from Volume III before we move on?  Horace Walpole to his inquisitive friend George Montagu, in 1756, from Volume III of the Letters (p.35):

"You bid me give some account of myself; I can in a very few words: I am quite alone; in the morning I view a new pond I am making for gold fish, and stick in a few shrubs or trees, wherever I can find a space, which is very rare: in the evening I scribble a little; all this mixed with reading; that is, I can't say I read much, but I pick up a good deal of reading."

His life as a country gentleman is appealing, no?  How about this, from the same to the same, on May 5, 1761, describing a spring evening in the country (p.399):

"...at Strawberry, where my two passions, lilacs and nightingales, are in full bloom.... Gray and Mason were with me, and we listened to the nightingales till one o'clock in the morning."

This period in his life is so interesting - in his early 40s he's withdrawing from politics while still observing them closely, spending more time in the country, and visiting other country houses, while building his own and furnishing it.  He's taking up correspondences with a few women, and will spend the next several decades writing to them, along with the men he's already been writing to for twenty years (and he pitches his letters to the specific recipients so well, regarding topic, tone, and word choice).  He's straying into Patrick O'Brian territory, too, with talk of naval battles and expeditions, and it's fascinating to read such similar language, yet not from a historical novelist, rather from a contemporary, as Walpole's time begins to overlap with the world O'Brian describes.

I keep taking notes as I read - to what end I'm not sure - but it's an old habit and I enjoy it, so here we are.  More great words from Walpole, scattered throughout Volumes II and III of his Letters; it's a pleasure to write them out:

The end of Volume III is particularly verbose, as Walpole pulls out all the stops to describe to his far-flung friends the coronation of King George III and the weeks of hoopla surrounding it.  When it's all said and done, however, he says (p.443):

"Well! it was all delightful, but not half so charming as its being over."

Not being a fan of spectacle myself, I empathize - lilacs and nightingales for me too, please.  As the painter Renoir famously remarked:

"Give me an apple tree in a suburban garden. I haven't the slightest need of Niagara Falls."

Painting of course being on my mind, what with my solo show opening tomorrow evening.  Which I know I've already mentioned here twice, but these things do not happen often and thus bear repeating.  The next morning is the village book, plant, and bake sale, so that will be a wonderful thing to wake up to on Saturday.  And the lilacs - a huge old lilac hedge lives just across the street from our house.  It's in full bloom right now and the scent of it fills the breeze.  But no nightingales - they speak only in books in this part of the world.  We do hear hermit thrushes, though - one of my favorite sounds in the world, their song - and many other visiting beauties, at this time of year.  Ryan and I take long walks in the evenings, listening.