Again!  Help!  It keeps happening.  And I let it.  A brief break from Lees-Milne and Frances Partridge and diaries in general to speak instead of recent book purchases.  This weekend we visited a few local antiques shops, where used books are also known to lurk.  I bought some interesting but common books to browse in then resell, one inexpensive art book to read and keep, and one other, to read and treasure.  The last of these is this little item: 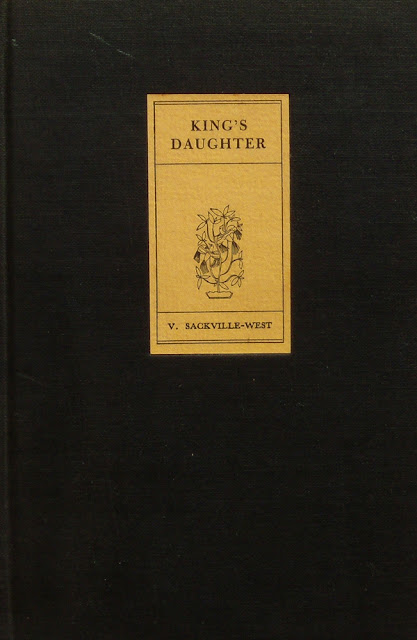 A hardcover first U.S. edition of one of Vita Sackville-West's books of poetry - King's Daughter (Doubleday, Doran 1930).  Black cloth covers, paper label on the front cover, with a lovely little device of two birds in a potted plant, which is repeated on the title page, and of course has me thinking something along the lines of A book in the hand is worth two in... the shop?  Back to the shop - we had circled the place, both floors, without finding anything we needed or wanted, then on our way out, in a glass case near the entrance, Ryan spotted this.  The only book in the case.  With a little flag that said signed by author.  I asked to see it, held it, wanted it, pined even.  Then I said I'd think about it, and handed it back to the proprietor.  We left the shop.  I was of course furiously thinking about it.  We got in the car and Ryan, prince that he is, immediately said, "I can't believe you're not going to buy that book!"  I looked straight ahead and said, to myself as much as to him, "I really should buy that book."  He said, "Get it, get it!"  So I walked back into the shop and said, "I thought about it.  I'll take it."  I wrote a check for a hundred and twenty bucks and we brought the book home to stay.

Sackville-West's travel and gardening books all survived the big book room sort/divestation of last month.  I love her travel narratives Twelve Days and Passenger to Teheran, and own a first U.S. edition of the former and a reprint of the latter.  Until now I had only seen her handwriting reproduced in other books, but here it is now, up close, in our very own home: 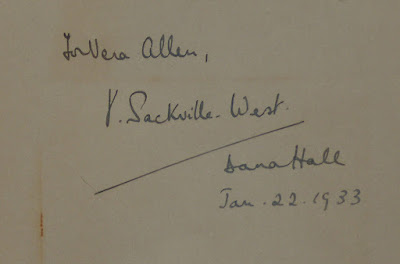 I am attempting not to gloat (it's not an attractive trait, is it? but still, justified sometimes...?).  Signed on the front free endpaper, inscribed to a student at the Dana Hall School in Wellesley, Massachusetts when Sackville-West was speaking there.  On the pastedown Ms. Allen tipped in her bookplate, the glue of which has registered a faint ghost, but nothing major.  Bought and read on Saturday, admired on Sunday, and re-read on Monday.  I have a very long convoluted story, involving several books, a few people, and a certain place, about why Vita Sackville-West means a lot to me, above and beyond her writing, but I will save that for another day.  Meanwhile, I'm simply enjoying this new addition to the book room.  It's very thin and small, too, so it hardly takes up any shelf space.

But I almost forgot to mention the text itself, the contents!  The book contains poems mostly from a he to a she, or a she to a she, that point isn't specified.  Love poems they certainly are, however, and darkly sweet.  A taste (p.24):

"Onyx is counted black, and marble white;
Peaches that ripening hang on a sunny wall
Are counted soft and downy to their fall.

So may they be, yet I will not compare
Her heart to onyx, throat to marble fair;
Nor say, 'Beside her skin, are peaches rough.'
She is herself, and that shall be enough."

So, a bit of advice, for when you are hesitating, book in hand, thinking, This is self-indulgent, I don't need this book, I own so many already, and the money, o the money, what to do, what to do...  Give in.  Spending money is for spending.  BUY THE BOOK.

Since last we spoke, I finished my fall book-sort.  The books-about-books section wasn't as difficult as I had feared, in fact it was about the same as the other sections - the books I kept were mostly first-person accounts.  Of which I have many, by booksellers, publishers, librarians, collectors, printers.  It was altogether delightful to discover this, and visit once again with so many friends-on-paper.  Other books were easy to let go of, once I held them in hand and decided for myself.  I took away many cartons of books and even a few bookcases, and arranged them all in my book booth (at the antiques mall where I sell my books).  I have been doubly rewarded by a general feeling of lightness here at home, not to mention bookshelf-space, and above-average sales from my booth over the past month.  Both are most welcome.  Frankly, anything positive to keep my spirits up during this ridiculously offensive and depressing election cycle, I will accept with open arms.  I mean, really.  We don't need to go into it, do we...?  All I will say in that regard is that during the last debate, when He Who Shall Not Be Named said, "It's just words," regarding his taped descriptions of women and how to assault them, my blood may have actually boiled.  Oh, tra-la-la, only words.  As if what we say isn't indicative of who we are.  As if words do not incite actions.  As if... but I don't need to continue, other than to say that I cannot wait to vote and go from this slimy ordeal to whatever comes next.  (I hope with all my heart that it's not yet another slimy ordeal.)  Let's talk about words some more, and how much they matter.

All twelve volumes of the diaries of James Lees-Milne are behind me.  I feel like I should write a long comprehensive missive about their depth and tone and the thousand details that fascinated me throughout.  I took pages and pages of notes from them, about people mostly, and how he describes them, but I also transcribed sentences I love, and wonderful descriptions of places.  And in the later diaries, the final volumes, his process of aging, and losses of all kinds - their cumulative effect becomes a harrowing primer on growing old, yet remains oddly comforting, as he maintains his intellectual curiosity and myriad interests and friendships until the very end.  I may still write that long comprehensive missive, but not today.  Since I am already on to other things, namely the diaries of Frances Partridge.  I owned one odd volume (unread) from the set, and brought it to light after a kind blog-reader suggested that I might like to read them all.  (Thank you!  How right you are!)  They are the perfect follow-up to the Lees-Milne diaries, as they cover the same time span, and describe many of the same people.  Not to mention the fact that they knew each other.  But oh, the writers themselves are so different!  In a nutshell, Lees-Milne a conservative man, Partridge a liberal woman.  Both so very intelligent, but Partridge takes that particular cake, and then some.  Not that there needs to be a competition.  But even Lees-Milne says:

"I am finishing Fanny's latest diaries, which are of course splendid.  What an intelligent woman.... She makes my own diaries seem adolescent and low-brow."  (The Milk of Paradise:  Diaries, 1993-1997 p.128)

What he doesn't admire about her turns up in another of his diary entries, and tells us more about himself than about her:

"I find Fanny Partridge's diary riveting, especially as I knew most of those she consorted with.... She is a very good writer.... But the more I read the less I care for Fanny.  Her prejudices come through like vitriol - anti-God, anti-royalty, anti-upper class..."  (ibid p.53)

But I would expect him to say this, since his own diaries are often quite concerned with God, royalty, and the upper class.  (Generally speaking - he had religion, lost it, and possibly regained it; he admired the monarchy in general but doesn't spare the royals in his writing; he lives with and observes the upper class, constantly).  Anyway, I love this reading transition I am making, from Lees-Milne to Partridge, it feels perfectly right and suited to our own times, and I am already well into volume two of Partridge's diaries.  The first volume, A Pacifist's War (Universe Books 1978), covers the years of World War II, and her life with her husband Ralph Partridge, at their house, Ham Spray.  They were conscientious objectors, and spent most of the war years farming, raising livestock, taking in refugees and friends, raising their young son, and trying to maintain their beliefs in music, art, reading, and intellectual life, in the face of war.

She wins my heart with her writing, time and time again.  This from 1940:

"A long conversation with R. about the French Revolution, Napoleon, Hitler, and so forth.  I am now in the last volume of Walpole's Letters, and his horror of the violence and savagery across the Channel made me realise what it must have been like having it going on year after year.  H.W. was so affected that he felt there must be something radically wrong with the French nation never before suspected, some monster blood in their veins.  (Just in fact what people are now saying about the Germans.)"  (A Pacifist's War p.57)

"This evening after much cogitation I began reading Madame de Sévigné's letters.  I am so tired of reading bad books, and books (Cyril) Connolly says I ought to like and I don't.  It is heartening to embark on these fourteen stout volumes of reality."  (Everything to Lose p.83)

I could say the same about her books, here and now.  And there is so much more I could write!  I mean, I have seven books by other people on the bedside table right now, in various states of readerly unfinishedness, but you'd never know it, because all I want to do is keep right on reading Frances Partridge.  Since she knows words.  She has the best words!  Oh wait, we seem to be straying into the thicket of politics once more.  But I'll let her have the final say.  She speaks so eloquently about words in this passage, written after reading Virginia Woolf's essays (ibid p.65):

"How tired I get of being imprisoned in my own vocabulary - the words I choose to fit my thoughts into when talking or writing.  If it had no other purpose, reading would be enjoyable for the change alone."