Hi friends.  Checking in for the first time in a while.  The past few months seem to be full of things I never thought I would see or do.  Or not see and not do, as the case may be.  For one, my attention span is shot, so I haven't been reading books much.  (Brief pause to let that sink in for a moment.)  But about a week ago I had a change of heart, or we could call it an attitude adjustment.  And I needed one, because despite attempts to the contrary, I found myself focusing more on difficulties and problems and not enough on bright sides and solutions.  One thing I did read, merely a tiny sniglet of a factoid, helped me turn a corner in that regard.  I read that the population of the United States is only a little more than 4% of the world's population.  4%!!  I don't know why I thought it was much more than that, all these years, but I did.  So I examined why I thought that, and concluded that I am just as susceptible to propaganda and patriotism as the next person, and had thus bought in to the idea that this country is somehow the biggest and perhaps even the best (despite evidence to the contrary).  And, in my comfy bubble, I have also been sadly ignorant about what's happening in countries besides this one, other than the most basic facts, and sometimes not even those.  Another egotistical insular American, that's me!  In my own defense, the news in this country has truly been fascinating and disturbing, and right now it is mighty hard to look away from, for any length of time. In fact that's mostly what I've been reading, and watching.

Another turning point that assisted me in my attitude adjustment has come from the massive response to the inauguration of the current president, and its aftermath - from environmental groups, social justice groups, concerned citizenry, elected officials at all levels of government, the free press, other countries - the list goes on and on and so do the protests and actions, for the foreseeable future.  So I am taking heart because I now know that good people are working on all levels, in so many ways, however they are able to.  For my tiny part, I have been writing to our congresspeople from Maine.  Regularly.  About all kinds of issues, people, and concerns.  Something I have never felt I needed to do before, except regarding a few particularly egregious happenings in our recent history.  Again this realization made me examine my own biases, and conclude that as a white, middle-class resident of a quiet rural town in a beautiful state and a free country, I have had it pretty damn good in this life.  So far, I have been bumbling along, doing what I wanted to do, loving life for the most part.  Even when our country was at war, for god's sake, when I should have been more active, I haven't felt that I needed to protest, or contact elected officials, much, or donate money to causes that were already supported by so many other people.  Or worry about the fate of our country and democracy in general, beyond the usual.  I always voted, and thought that was somehow enough.  Perhaps it once was.  But now, what an upheaval!  Clash of the zeitgeists!  Can you have more than one zeitgeist?  Or rather a new zeitgeist, a very vocal active one, in opposition to a different zeitgeist, a quieter, stonewalling one?  Both seem to be in full swing.  Progressive and conservative.  Tree hugger and... not.  The majority of citizens in this country and the Republicans currently in the driver's seat.  I don't need to name names - and frankly I can't even type one particular name without a strong feeling of physical revulsion, so I won't - but I will say that the latter is systematically chipping away at so many things I care about.  Not to mention at the fate of us all, on this planet we share.  Where this will lead, I can't imagine.  This is not a drill.  This is not a cold-war spy novel.  I remember writing a long report about Watergate, for a class in high school.  I was fascinated then, and remain so now, with how everything unraveled, slowly but surely, for those in positions of great power.  Today, I am feeling relatively cheerful about the distinct possibility that something similar will happen again, and soon.  Meanwhile, upheaval and chaos.

Here is an upheaval of a different kind.  Although, when I think about it, not really: 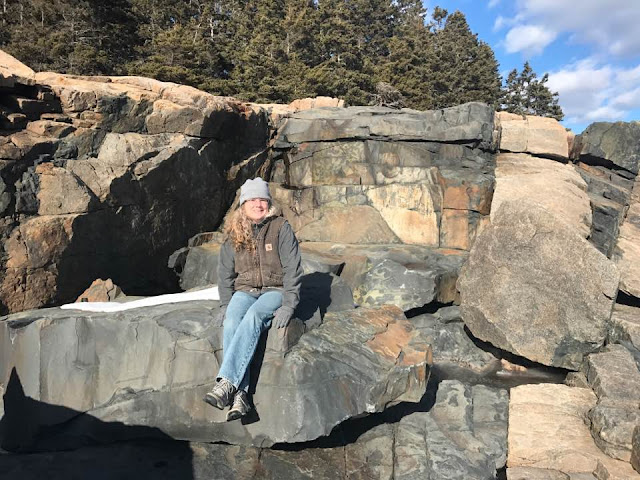 It's a literal upheaval.  Because when I last saw it, a month before this photograph was taken, the big rock I am sitting on was ten feet behind me and ten feet up, and was still attached to the ledgy area right behind me.  What happened...?  The ocean came in, the water came down, the ice worked in the cracks, the January thaw was particularly warm this year, a few tides were incredibly high, and BOOM - one stormy day set it free.  I wish I had been there to hear and see it happening, but it was enough to come around the corner and see the new version of things, a few weeks ago (that's snow next to me, by the way - this was not a warm day!).  I have been sitting on this particular rock, on and off, for several years.  It's one of my favorite places to paint - a small corner of Acadia National Park.  One rocky ledge - I know it well and have spent some very happy days with it.  And now - things have changed.  The Gulf of Maine is warming and acidifying.  The sea level is rising.  The shorelines are eroding.  Many species are in trouble.  And things we thought would last forever - seemingly impervious ledges among them (not to mention democracy) - are in flux.  In the months ahead I'm still going to sit on this rock, to paint and gaze out to sea, and watch sea ducks.  It's just that, along with so much else lately, my perspective and my viewpoint will be different.  As I question myself, educate myself, work for the greater good, and support those who are doing likewise.

I do want to mention one book I managed to read recently.  It took me a while to get through, but the drought hasn't been total:  The Hidden Life of Trees: What They Feel, How They Communicate - Discoveries From a Secret World by Peter Wohlleben (Greystone Books 2016).  This interview with the author gives a taste of what the book contains.  Read it, and the book, and be amazed, if not stunned, at how much there is still to learn about this home of ours and everything in it.  Gives me hope, and brings wonderment, too.  Which in turn helps me keep things in perspective, and helps me keep my face to the sun, even when it seems difficult to do so.