Speaking of George Smiley!  I don't know how I missed this before now, but I just found out that John le Carré has written a new novel.  One that not only sounds eerily appropriate to our current socio-political situation, but also may tie up the loose ends he left hanging over twenty-five years ago, regarding many of his most beloved characters.  This feels like it could be one of those books - you know the ones? - the books you weren't sure you would ever live to read, primarily because the author hadn't written them and never would.  For all sorts of reasons.  And then, at this late date... WELL.  I mean, well, well, well!  To say this makes my day is putting it lightly.

Hinting about what's to come is a wonderful note from Penguin editor Mary Mount, encapsulating the experience of reading his new manuscript for the first time:

"As the light faded outside on that November evening, I realised that this had been one of those rare days I had spent doing exactly what I imagined I would do as an editor when I first started in publishing: simply sitting in a room and being completely transported by a remarkable manuscript fresh from the author’s hand. I felt enormously lucky to be one of the first people to read A Legacy of Spies."


Welp.  What a time (I think I've said it before but it bears repeating).  No jokes on April Fool's Day because I haven't got much of a sense of humor at the moment.  I wanted to write here in March but have been too busy eating my heart out with anxiety about the state of our country and have gotten distracted from wonderful much-missed plain old daily life by, oh, let's see, Intelligence Committee hearings on C-SPAN, apocalyptic news feeds, and various conspiracy theorists galore, on social media, in the news, and in print.  Which I do not feel embarrassed about in the least, since we do actually appear to be involved in an honest-to-god conspiracy, of truly epic proportions.  Fascinating and terrifying.  The real news wasn't apparently enough for me, either, since I turned last month to my own bookshelves here at home and re-read John le Carré's splendid Cold War fictional trilogy - Tinker, Tailor, Soldier, Spy, The Honourable Schoolboy, and Smiley's People (Knopf 1974-1979), and a book of interviews with him to boot, Conversations with John le Carré, edited by Matthew J. Bruccoli and Judith S. Baughman (University of Mississippi Press 2004).  Then, this afternoon, I stopped by a local bookshop and promptly pounced on one of the first books to catch my eye:  The Pigeon Tunnel: Stories from My Life, a memoir by John le Carré (Viking 2016). 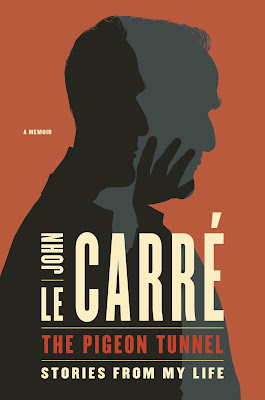 Nonfiction from this author is scarce - cannot wait to read it, may have to start tonight!  I mean, the very first chapter is entitled Don't be beastly to your Secret Service!!  Perhaps we should we send copies to the White House?  Yes?  But wait, does anyone currently there read books??  (Rhetorical question.  Cruel, too.  Sorry... not how I like to be, but...)  I also bought Trevor Noah's memoir Born a Crime: Stories from a South African Childhood (Spiegel & Grau 2016), which I cannot wait to read as well, because The Daily Show is one thing that is helping salvage my shipwrecked sanity right now, but I will save discussion of that for another day to focus instead on SPIES and RUSSIA.

First, the Smiley trilogy - the height of the Cold War, writ large by an author who denied for the longest time that he had ever been anything other than a boring, run-of-the-mill foreign service lackey.  Average guy.  Not actually a spy, nothing to see here.  Until he said oh well, yes, actually he was a spy.  For a while.  Not too long.  Oh, okay, years.  But when he made enough money from writing novels he quit that game for good.  I am happy to report that the series has aged well.  I loved these books when I first read them circa 1990, and before that, when I was even younger, I remember being frightened by the quiet horror of the British television series starring Alec Guinness as George Smiley.  I think the first book, Tinker, Tailor, Soldier, Spy, remains the best of the three.  Even when you know whodunnit, the gradual building of suspense and downbeat denouement is still masterful.  The whole storyline is a thing of beauty - characters and their motivations drawn so well.  The second book is more of a James-Bond-y type story, with exotic locations, various dishy and/or sketchy women, and a truly cinematic ending.  The third book is almost overkill, and its ending comes too soon, I think.  It felt too easy, or rushed, or something, even though the plot itself is as neat as a pin.  But I must make allowances for the fact that I may simply have wanted the series to continue instead of stop.  What all the books hinge on is moral culpability.  And the balance of power between adversaries (both the U.K. and Russia and individual spy versus spy).  And honor.  And how those things are almost - *almost* - beside the point in a field of endeavor such as spying.  It's a mighty fine line, apparently.  To wit, John le Carré says, in one of the interviews from the Conversations book I mentioned, in response to the question about whether or not being an intelligence officer gives you a sense of superiority:

"At a time when I was one, it did.  It is the feeling of being the only person with a pistol in his pocket - although I did not actually carry one.  It is the feeling of belonging to an elite that does questionable things so that the average person can sleep in peace.  An heroic self-image.... you are doing the questionable things also because the criminal side of your nature is called upon.  It is an enormous pleasure to organize a burglary with the support of your government.  A double pleasure."  (p.112)

He goes on to say, regarding the fictional hero he disliked very much indeed:

"...I have never seen James Bond as a spy.  Rather, I consider him to be a child of the western economic miracle, with a license for extreme misbehavior in the interest of capital."  (p.116)

Again, fascinating and terrifying.  Those quotes sum up, neatly, why I am not in a joking mood right now.  Particularly regarding "...extreme misbehavior in the interest of capital."  BOOM.  Insert political rant here?  I think I will let it go, instead.  There are enough of those within easy reach of anyone, across any platform at any given time, and the world doesn't need one more.  Suffice it to say, indictments cannot come soon enough, in my opinion, for anyone who will merit such things, in this allegedly treasonous administration.  If many (persons, indictments), so much the better.  Apologies if that sounds idealistic.  I can't help myself.  I want so much to believe that justice works slowly yet thoroughly, no matter what.  If that makes me a fool, there I am, it's a good day to be one.  I'll end with a quote from John le Carré's father, again from the Conversations book - le Carré tells us that his father said, when standing for Parliament, despite being a conman and shyster of the highest order:

"'Ideals are rather like the stars.  We cannot reach them but we profit by their presence.'" (p.166)

And, idealism intact albeit shaky, I must mention just one more thing:  it was WONDERFUL to browse in a bookstore today.  I recommend doing just that, when overwhelmed or otherwise.