In my last post I may have spoken too soon.  About spring.  It arrived, sort of, but today is rainy and cold and some snow flurries have been flying around the state.  I mean really.  I got out to paint earlier this week but after a few hours had to seek shelter in the car and paint from there, the bite of the wind was so sharp.  But enough about the weather.  I meant to write in April about all sorts of things, books among them, but had a hard time finding the motivation to do so.  The state of everything has laid me low, I have to say.  Some personal events, the ongoing political news, the dire state of our ailing planet.  I am not finding solace and comfort easily, or really anywhere.  The things and experiences that used to bring me joy, no matter what, are feeling more and more like stopgaps.  I am trying to find ways to let them act instead as stiles, the sturdy steps to take to go up and over the difficulties we face, that block the ways between our open fields.  So here I am today, taking one such step.

I could talk about appetites, since I noticed that two of the books on my bedside table in recent weeks deal with that very thing, in direct and indirect ways both: 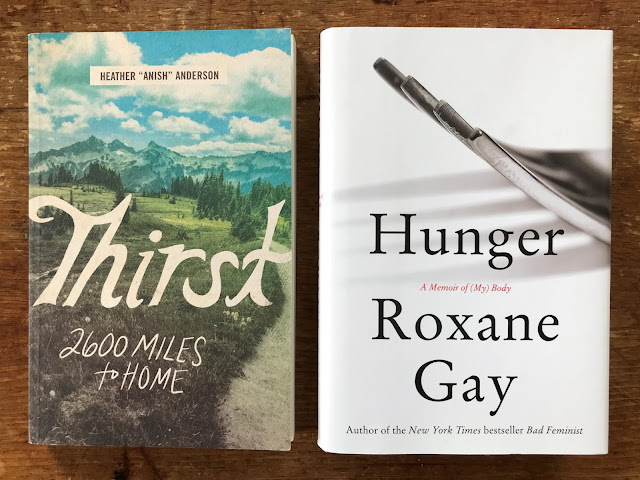 I recently saw Roxane Gay speak at a local college, and hallelujah she signed books afterwards: 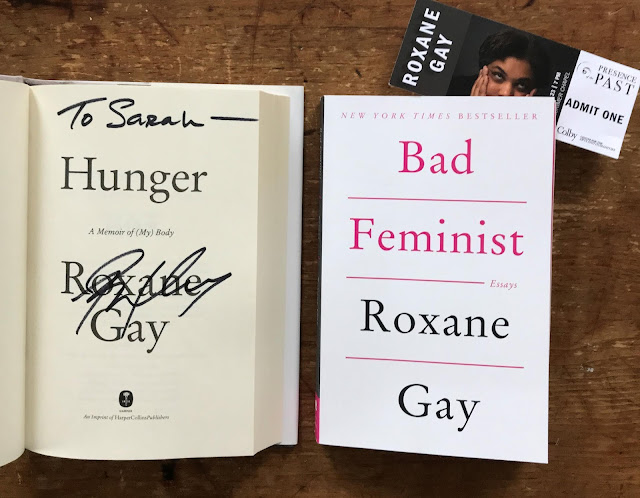 She was fantastic.  It was a privilege to hear her, and meet her briefly afterwards.  She spoke about activism, among many other topics, and said (I paraphrase) that she wants to make room for AND and BOTH, and that shouting at each other only makes a lot of noise and leaves everyone feeling unsatisfied and hollow.  She emphasized coming at saving the world through a lens of love, if it is love for friends and partners or love through faith or worship, because without love we are hollow.  Then we act from that place of hollowness.  And when that happens, trouble ensues, for all of us.  She got a laugh from the audience when she said that she wasn't evolved enough personally to love everyone, that she thought some people weren't worthy of love, but she did talk about how we can make space for people to rejoin the community, and how redemption is a pathway forward to that.  Up and over we go!  I haven't started reading Hunger: A Memoir of  (My) Body (Harper 2017) yet, I'm immersed in other books at this moment, but I will start it when I finish Bad Feminist: Essays (Harper 2014).  A bit from that:

"Like many writers, I lived inside of books as a child.  Inside books I could get away from the impossible things I had to deal with.  When I read I was never lonely or tormented or scared.  I read everything I could get my hands on...."  (p.65)

"Reading remains one of the purest things I do.... I derive a great deal of joy from reading - highbrow, lowbrow, I'm into all of it....  It's great to remember that reading is my first love."  (p.175)

Heather "Anish" Anderson describes herself this way:  "Growing up, I was overweight, inactive, and introverted - a bookworm of the highest order...."  (p.25).  In her memoir Thirst: 2600 Miles Home (Mountaineers 2019) she chronicles her Pacific Crest Trail through-hike, during which she walked about forty to fifty miles per day, to break the previous record for fastest known time.  She starts in the desert in Southern California, literally thirsty beyond measure, barely making it from water source to water source in the extreme heat.  Her book is about that basic human need, while also being about a much greater thirst.

What else have I got today.  How about this - when I have a certain kind of appetite, I still go to a bookstore.  Bookstores always seem to provide the kind of sustenance that I most want, they ease my hunger pangs, even if lately they don't assuage them altogether.  On a recent trip, late last week, I came away from one shop with a few new books: 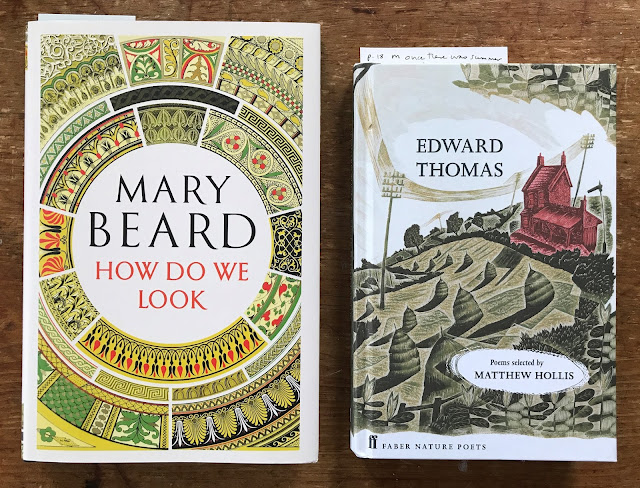 Now I'm in the middle of Mary Beard's How Do We Look: the Body, the Divine, and the Question of Civilisation (Liveright 2018), and I realized after buying the book that it is a companion to her tv program of the same name, so I will seek that out somtime soon.  I'm fifty pages in and so far the book is a thoughtful conversation about ancient art and history and how we humans choose to portray ourselves, and why.  It has such a stunning cover, too, and feels so good in the hand - heavy and full of color plates.  I bought the Edward Thomas book because I've never read much of him and keep coming across references to his poetry and nature diaries in other books, so, now I know a bit more about him.  Edward Thomas: Poems selected by Matthew Hollis (Faber & Faber 2016, in the Faber Nature Poets series, with these lovely covers, now I want them all).  Come to think of it, I believe I have come across many references to Edward Thomas in the writings of Robert Macfarlane - one more thing I did at the bookstore was order his new book, which is already available in the U.K. but still unpublished here in the U.S. until early June, Underland: A Deep Time Journey (Norton 2019).  I think this book will be another stile, another way to lift up from gloom and doom, and take heart once more. 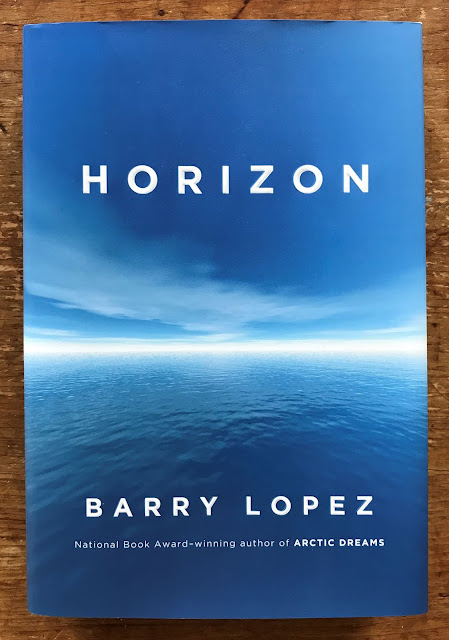 Book designers are killing it lately.  I saw this book and my hand reached out for it before I even knew what I was doing.  Same with the Mary Beard book, a pleasure to behold.  And to read?  Well, I don't know.  Lopez spells it all out for us, the bad news of the world, even while he's seeking the light.  This book stretched my brain in a good way but also frustrated me.  It is full of the stuff of classic high adventure and exploration tales - archaeology in the arctic and in Africa, nature in the Galapagos, solo camping in the Pacific Northwest, journeys across Australia, and around the Pacific Ocean with Captain Cook, I mean this book has everything but the kitchen sink in it.  I felt like each chapter could have been its own book and I would have been satisfied, and more able to focus on what he was saying.  As it stands, Horizon is like a world atlas seen through one pair of eyes, looking, noting, questioning, positing.  He says about himself:

"In my hurricane mind, the churning of esoteric information goes on, thoughts I can't seem to organize well enough to create any points of stillness"  (p.207)

And perhaps that was my problem with this book.  There were plenty of points of stillness within it but they were overwhelmed by the movement, the incessant travel, the seeking.  Many times in the book he seems on the brink of despair himself, at the state of the world, and our treatment of it, our own and only home.  He offers some suggestions in the manner of someone who knows that they will not be heeded by those who currently rule:

"...human cultures need to distinguish between sentimentality about loss and the imperative to survive.  They need to establish a more relevant politics than the competitive politics of nation-states. And to found economies built not on profit but on conservation.

"The seductive power of this system of exploitation - tearing things out of the earth, sneering at the least objection, as though it were hopelessly unenlightened, characterizing other people as vermin in the struggle for market share, navigating without an ethical compass - traps people in a thousand exploited settlements in denial, in regret, in loneliness.... (you must) sympathize with every person caught up in the undertow of this nightmare, this delusion that a for-profit life is the only reasonable calling for a modern individual."  (p.368)

Whew.  One of the main points he seems to be making in the book is that the horsemen of the apocalypse are visible on the earth's horizon, and it is up to us to identify them and figure out what to do to save the world as they come ever closer.  One of the ways to do that, he suggests, is to have people at the table who have not been at the table in recent times.  Particularly elders and the marginalized, and not those with an economic and political stake in whatever outcomes may occur (p.311).  Honestly, this may not have been the best book to read when I am already feeling down.  However, his elegiac introspective prose, often about the beauties of nature and the wonders of the world, lifted me up at about the same rate as the bad news about climate change and human nature brought me down, so I guess I find myself even, at the end of it.  Sitting up on the stile, wondering which field to walk through next.  My appetite reminding me not to wander too far from home.