Hi friends, here it is, early summer and the light is longest, let's make the most of it!  I've been doing my best to hold up my head and do that very thing.  I wasn't able to go away for the annual island painting trip I usually take in June, for reasons far beyond my choosing or control, so I spent those days instead visiting with the island on the page.  I forged out a mini-retreat here in our own home, and buckled down to edit my way through the most recent draft of my island painting book.  And now I've reached a new plateau with it, one with a clear view to the finish, and a navigable path to get there.  The narrative is holding together, I am editing out the repetitious blahs, and adding in what still needs to be added in, for clarity and with purpose.  I have a list of what to do next, and how to do it.  I am quietly pleased, to say the least.  Since a few short months ago I was afraid of foundering altogether.

Drafts pile up.  I just added the top layer this morning, after finishing with it yesterday: 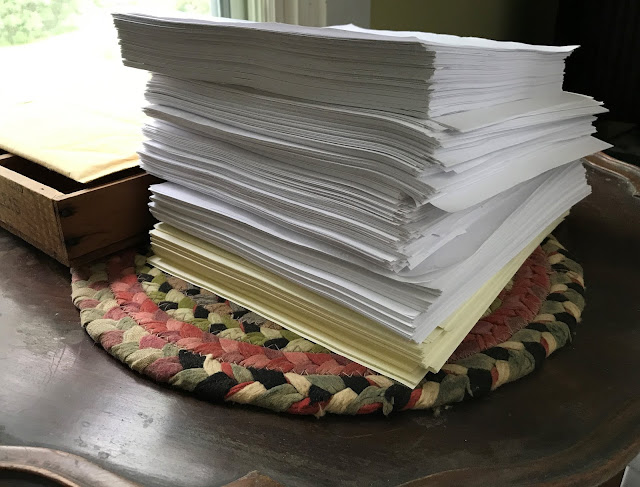 Will it be any good?  That remains to be seen.  It will be true, and someday it will be finished, that much I do know.  It's hovering around 100,000 words, but many of those still have to go the way of the dodo.  Please pray for me, if you are so inclined.  In other bookish news, we attended a library sale last week, unexpectedly.  As in, we were driving by on our way to somewhere else and saw big signs that said BOOK SALE, and had to stop.  The sale had already been underway for a few hours, so I didn't find much, but what I did buy I was happy with: 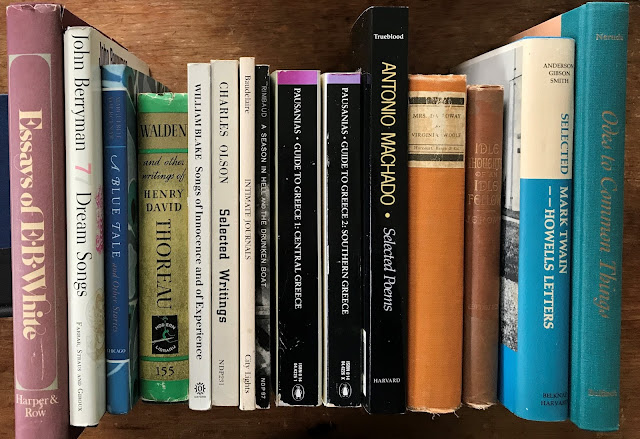 "I bought a puppy last week in the outskirts of Boston and drove him to Maine in a rented Ford that looked like a sculpin."  (Harper & Row 1977, p.14)

He sets the scene and gets right to the action, the interesting stuff, and the big theme, all at once.  I know from recent experience that doing that isn't as easy as he makes it look.  I browsed my way through the other books too, and inside the back cover of the shabby third U.S. printing (Harcourt, Brace 1925) of Mrs. Dalloway found this tiny treasure: 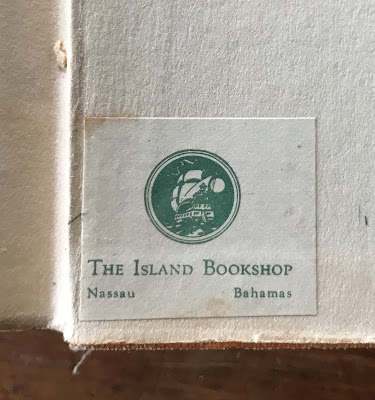 I haven't found a great bookseller's ticket in ages, and this one really gets me right where I live, I just love it!  I remember when I first began this blog, one of my earliest posts featured some of what I called the luggage labels of the book trade.  I keep my collection in two stamp albums and still add to it when the opportunity arises.  I love that the book is American, found its way to a bookshop in Nassau, then came here to Maine.  Who knows how the book's travels unfolded between these stops.  I wish I could map it somehow.  I like the galleon dingbat, and in fact I own a piece of metal type that looks almost exactly like it.  I can't really believe that, and you might not either, but I just pulled it out of the type cabinet in our living room, and here it is: 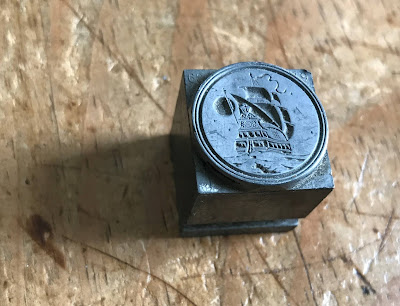 It must have been a common dingbat at that time, since I don't have that many, or that much type in general.  Anyway, I'm keeping Mrs. Dalloway, for the ticket and of course to read, since... I've never read it (ahem).

Recent books I have read:  I finished the memoirs of Anthony Powell, all four volumes (Holt, Rinehart, Winston 1977-1982).  Last time I wrote here I mentioned that with the state of the world as it is I was having trouble finding joy in the things that used to always bring me joy, and with that in mind I turned to a series, to occupy my mind with a long term reading project.  For about a month I visited with Powell and his friends and acquaintances, and while the experience wasn't completely delightful it was enjoyable.  This is a good memoir for anyone who might like an insider's view about publishing in the 1920s, the early lives and careers of Waugh, Orwell, the Sitwell clan, Robert Byron, Powell himself, and a wide panorama of literary others, for decades.  His war years are interesting but not as harrowing or as fully described as Frances Partridge's or James Lees-Milne's, in their diaries.  I plan on beginning his sequence of twelve novels next, A Dance to the Music of Time, which has been on my shelves foreverrrrr and I decided I simply must give it a go.  I'm wondering if Powell will be more forthcoming emotionally in his fiction, the way he didn't quite seem to be in his memoirs.  Which were frank, but lacked something I couldn't quite name.  Powell's memoirs are back in the book room, ready to be reshelved: 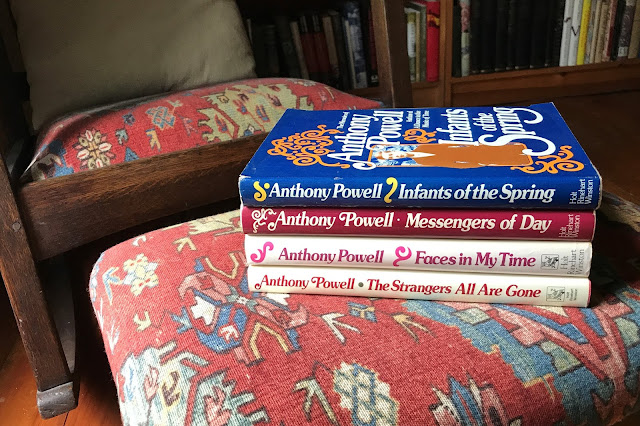 Now I am in the thick of my most recent to-be-read pile.  Some of the books from the library sale haul will find their way in here too, I'm sure.  But at the moment, things stand this way: 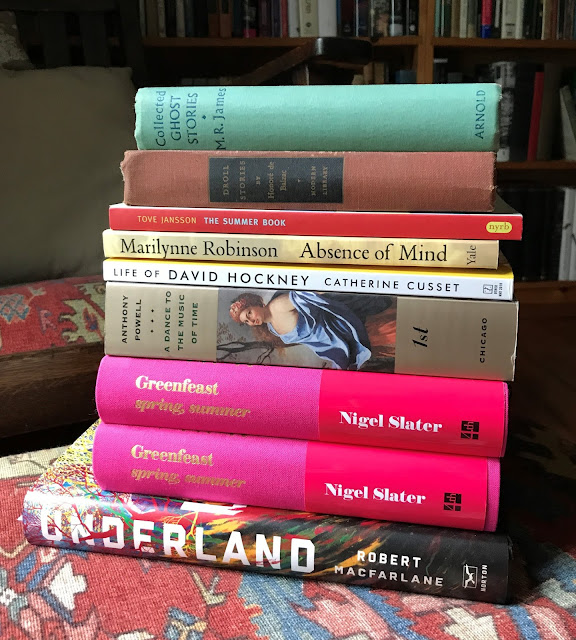 I have the University of Chicago set of paperback reprints of A Dance to the Music of Time.  The first volume is on deck.  Let's see how the summer unfolds, and what I pick up after finishing Robert Macfarlane and Nigel Slater.  I now own two copies of Nigel Slater's new book Greenfeast (4th Estate 2019, happily this spring/summer volume will be followed by the fall/winter volume in a few months), because I ordered a signed edition and it arrived unsigned, so I reordered a signed edition, and now have one to keep and one to give to a friend.  He focuses here on plant-based eating, for the most part.  I am halfway in and loving the recipe ideas, and his entire aesthetic.  I am also halfway in to Robert Macfarlane's Underland: A Deep Time Journey (Norton 2019) and have far too much to say about it to write anything comprehensive at this time.  This shockingly gorgeous and highly unsettling book deserves its own review, so that may follow, when I've finished reading it, transcribing notes from it, and mulling it over.  I'm going to need a reading break afterwards, to let it settle, then I might follow it up with Tove Jansson's The Summer Book (NYRB reprint), if I don't start with Powell first.

I will give him the  last word today.  In volume four of his memoir, The Strangers All Are Gone, I came across this helpful and prescient passage, regarding the anger that might arise within us when we read the news:

"...it is better to remain calm; try to remember that all epochs have had to suffer assaults on commonsense and common decency, art and letters, honour and wit, courage and order, good manners and free speech, privacy and scholarship; even if sworn enemies of these abstratctions (quite often wearing the disguise of their friends) seem unduly numerous in contemporary society."  (pp.193-194)

I read that and think, Well, yes, but IT DOESN'T HAVE TO BE THIS WAY.  Change is coming, that is certain.  And I find renewed optimism within myself, and around all of us, and take heart once more.  Like I said at the beginning, let's make the most of the light!