The cat days of summer are here.  Hodge is flattened by the heat, as am I.  I've been doing my best to get out and paint and live the sunlit hours fully, but the temperature today has me inside in the shade, so here I am, writing.  The table next to me is mostly empty, except for the latest draft of my book-to-be, some driftwood, a shell, a few pieces of sea glass from a recent beach walk, and a pile of artists' facsimile sketchbooks, which constitute my current state of book-interest.  After finishing Underland by Robert Macfarlane, and reading The Summer Book by Tove Jansson, and starting nothing else from last month's to-be-read pile - see last post; sorry Anthony Powell, your time is not yet - I turned to these instead.  Can I speak coherently about books with almost no text in them?  Let's find out.

The first is a fairly recent acquisition, about one of my painting heroes - Nell Blaine / Sketchbook, preface by John Ashbery (The Arts Publisher Inc. 1986): 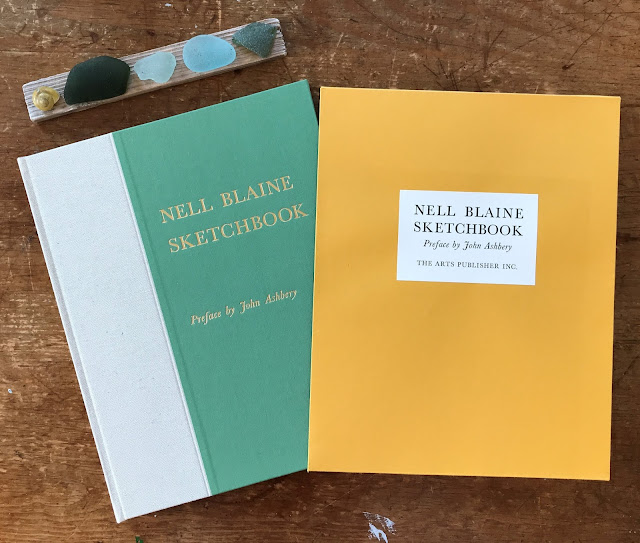 A lovely large hardcover in its paper slipcase.  This book is borderline expensive if you search for a secondhand copy, but instead I found it for sale, still new, at the Cape Ann Museum online shop.  The copy I received from them states in the colophon that it came from the artist's estate.  726 copies were printed, on thick Tintoretto paper that is a delight to touch.  Aside from the very brief essay by Ashbery about his friend, and a chronology and bibliography, there is no text, only drawings and watercolors.  I love to flip through the pages, studying the marks she made, as if I am reading the best news of the day.  But the text is fine too.  Ashbery writes (unpaginated):

"Ever since she first thought of becoming an artist, Nell Blaine has kept visual diaries in the form of sketchbooks like this one.  They are a parallel activity to drawing and painting: she said she always intended to use her notebook sketches in more finished works but never got around to it.  So the notebooks are like the diaries of a great novelist - Virginia Woolf, for instance - in that they offer rewards of their own, similar but apart from the work for which she is best known.  Since they offer a more private activity, done mainly for herself, we can feel the genius that informs her larger work here at a more tentative, spontaneous level: the work as it is just happening into being."

This makes me think fondly of one of my painting teachers, who made everyone in our class keep a visual diary.  He said every serious artist he knew kept some kind of journal, image file, or diary.  It was mandatory and we had to write in them, draw too, and paste images in, and they were part of our class grade.  I already had the diary habit but this teacher reinforced it and I am eternally grateful.  But back to Blaine and Ashbery.  In the next paragraph he says:

"The sensuality in these works is backed up by a temperament that is crisp and astringent, which is as it should be, since even at its most poetic, nature doesn't kid around."

Indeed.  Nature does not, even at her most beautiful.  How about a few images from the sketchbook itself, after that description of Blaine and her paintings.  First a floral still life, a rough version of the kind for which she is well-known: 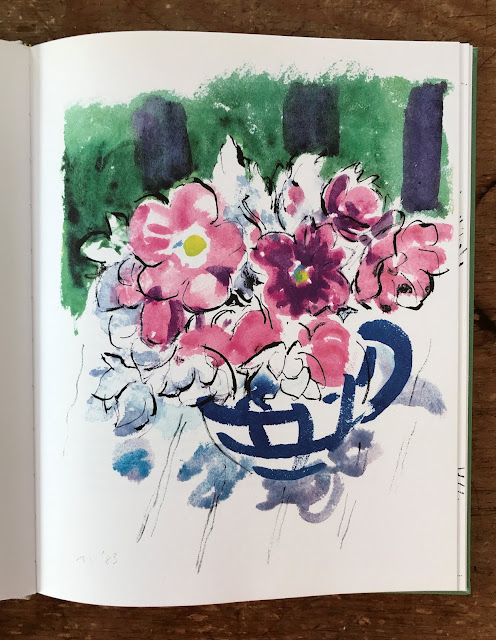 Then a landscape panorama of Gloucester, Massachusetts, ditto: 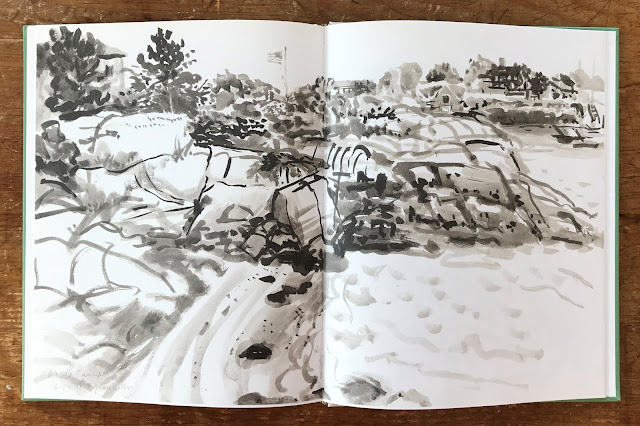 Seemingly casual, yet not.  I love these for their messy all-over-ness, their energy, their searching line, and rich marks.  They bring to mind the next sketchbook I will mention, made much later, David Hockney: A Yorkshire Sketchbook (Royal Academy of Arts 2012; the sketchbook itself dates from April of 2004): 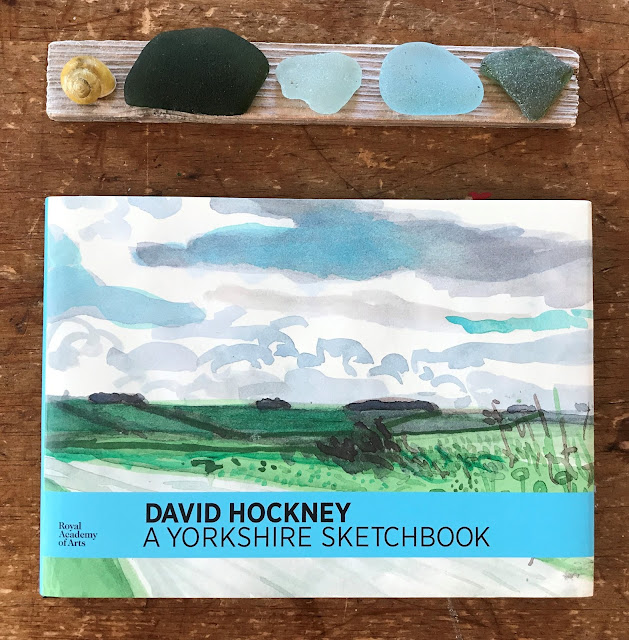 The only text is on the jacket flaps and in the colophon, not including a brushy word or two from Hockney, at the beginning and end of his drawings and paintings.  A glimpse within:

His landscapes, the planes of space, the descriptive marks he makes, how I love them.  Another favorite two-page spread:

For the full story on his Yorkshire painting years, I recommend the documentary David Hockney: A Bigger Picture (Bruno Wollheim 2010)- the trailer is here, take a look and see if you can resist wanting to watch the whole thing!  I couldn't, I bought a copy on dvd.  I particularly love the extra material at the end, the long nearly-wordless piece of film showing Hockney painting in a muddy lane over the course of a day.  He shows us what is possible, how far painting can go, and how far one ego can go as well.  (In a good way.  Mostly.  Egos are often so problematic!)  Anyway, I do love this little sketchook, and the film.

How about a few more?  A pair.  I've had both of these for years and years, and still love them as much as I did when I first found them.  If not more.  Both of these have slipcases and are so well-made, with black cloth covers and thick paper.  Like the Nell Blaine book they are a pleasure to handle: 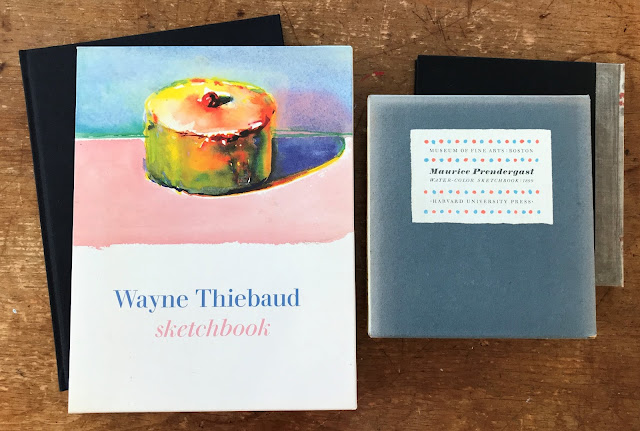 Wayne Thiebaud was one of my first painting loves as an art student (after Andy Warhol, who took the cake in that regard, so to speak) and he remains in my personal pantheon of art archangels today.  I ordered this sketchbook, Wayne Thiebaud: Private Drawings / The Artist's Sketchbook, selected and edited by Constance and Jack Glenn, with an introduction by Constance Glenn (Abrams 1987), about twenty-five years ago, when I worked at a new book store.  I don't remember the price but I do remember it was a financial stretch at that time, art books in general usually beyond the reach of my barely-over-minimum-wage clerk job.  Even with the employee discount!  Well, I was poor but buy it I did, and I still love looking through it all these years later.  What a fine draftsman he is, so sure of himself and his line, yet also as painterly as can be: 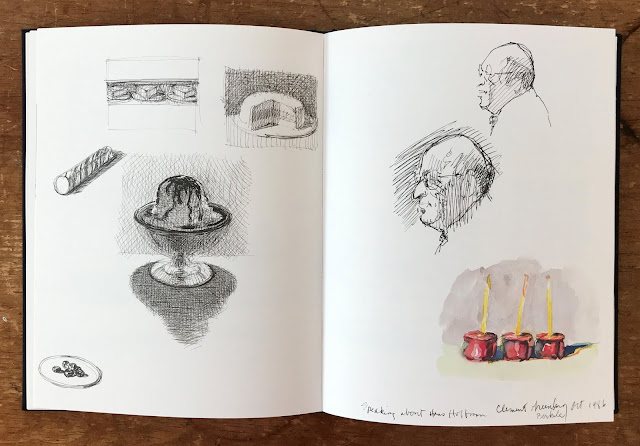 Still life, the figure, and the landscape - three of the great themes of art, throughout time - endlessly interesting, the closer we look.  Glenn says as much in her essay, that Thiebaud's subjects are "...simply draped over the hanger of classical, formal problems that have occupied artists for centuries."  She then quotes him (p.7):

"'I always think about what I call serious artists - those who are continuing and perpetual students.  That particular audience,' Wayne Thiebaud concludes, 'is the one that has always interested me - those who really do believe in a sense of tradition and use it as a primary engagement in their own work.'"

Her essay is in the booklet inside the front cover: 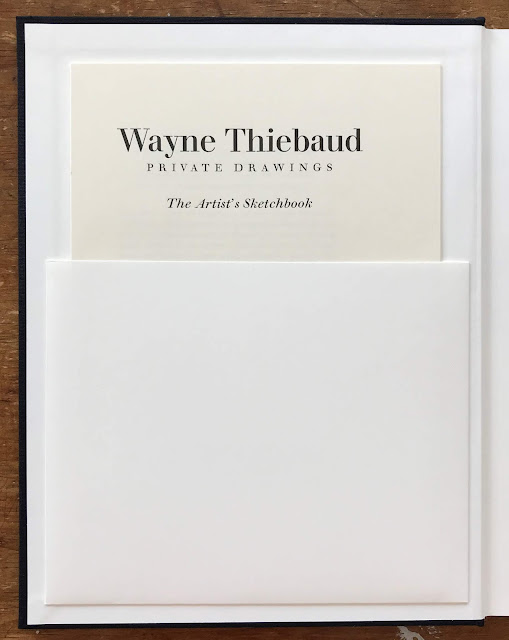 And my Andy English hedgehog bookplate now resides inside the back cover: 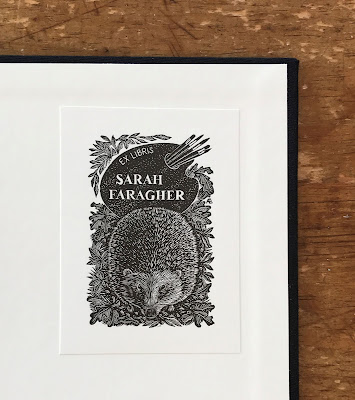 There's something about putting a bookplate into a book one has already owned for decades.  Perhaps it's like finally getting a marriage license after years of cohabitating?  Something like that.  Part honoring an important relationship, I think.  And part staking a heart-claim on the tiny piece of real estate that is this book, here, now, in my hands.  It's easy to imagine the artist holding it and drawing in it, or at least on the pieces of paper that make it up.  Thiebaud changes the orientation of the sketchbook when he needs to: 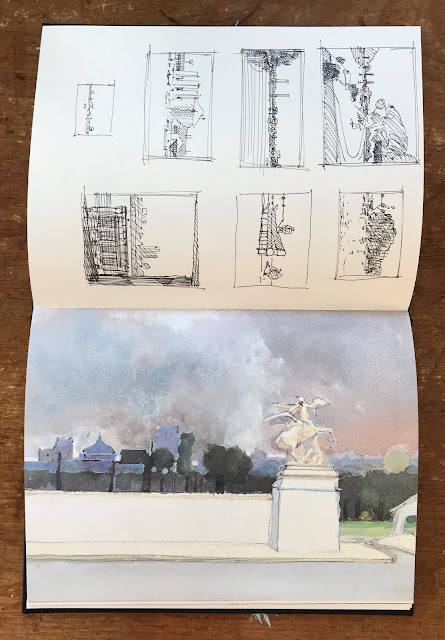 More where that came from, one of the final images in the book, mmmm, pie: 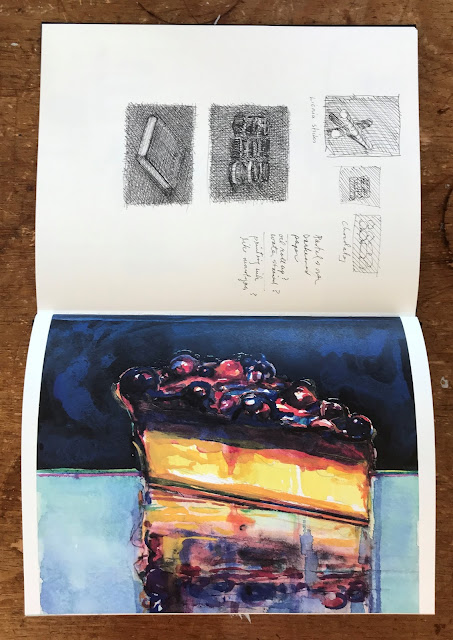 In the smaller square Maurice Prendergast sketchbook, the painter did likewise - turned it, perhaps to more easily draw on the right side: 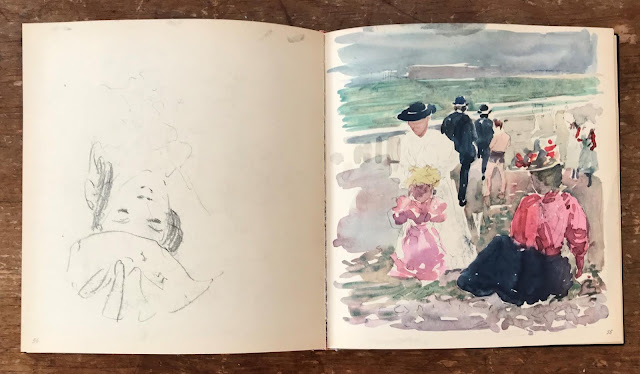 Now we see the upside down pencil sketch, across from the more fully rendered scene.  This sketchbook is full of families at the seaside, in big hats and summer clothes.  Prendergast's washy, swimming brushwork notes the quality of the day - immediate, life-breathing.  I see from my notation inside the back cover that I bought this for $5 at a book sale in the year 2000: Maurice Prendergast: Water-color Sketchbook 1899, critical note by Peter A. Wick (Museum of Fine Arts, Boston, and Harvard University Press 1960).  A 20-page booklet of text is tucked in a pocket inside the back cover.  In it, Wick tells us that this sketchbook only exists because after Maurice's death his artist brother Charles saved it from a fire in his own Irving Place studio, near Gramercy Park (p.11):

"In the winter of 1924/25 in the early hours of the morning with snow on the ground a fire broke out. Charles in a frantic effort to resuce the contents of the studio shattered the window glass and flung his most precious possessions out into the backyard, severely cutting his hand in the act.  Many things were damaged or destroyed, but Charles succeeded in throwing clear a number of Maurice's portfolios of water colors, several small oil panels, some badly scorched, and a group of his sketchbooks.  The singed corners of some of the pages of the Boston Sketchbook survive to tell the tale, but the leaves are miraculously fresh and free of water stain."

What drama!  Wow!  The stories behind the sketchbooks are almost as good as the books themselves.  And I love the fact that these ephemeral things survived at all, and then made their way into print, as facsimiles, because the artist, friend of the artist, family member, art historian, and/or publisher believed in their worth enought to usher them through the press.  The sketches they contain suit my summer mindset, which is to say they allow me to wander, contemplate, and daydream, even in the midst of the specifics they describe.  I read them as if the marks are letters and words, and gain some new kind of knowledge.  I'd like to find more books like these.  I still think about Frida Kahlo's illustrated diary, which I once owned, then sold, and always thought I would come across again.  But I haven't yet.  I know there are others out there.  I also think of a second Prendergast sketchbook, much larger in format, also slipcased.  It sat on a shelf in local used book barn for many years.  I visited it from time to time.  It was priced at $95.  I should have bought it, but I never did - that intersection between available monies, desire, and other books also at hand, asking to be bought instead, did not ever line up in the right way.  Unusual, for me!  What can I say.  I guess nothing else.  Except, Maybe I'll go make a few sketches...