Summer was way too short this year.  And I have an end-of-season cold that is dragging on.  I can't even.  I'm already wearing jeans and sweaters and worrying that we don't have enough firewood for the whole winter.  Even though it's stacked and ready.  The firewood I mean, waiting to be broached, like another kind of to-be-read pile.  I have a few, at the ready.  This is one: 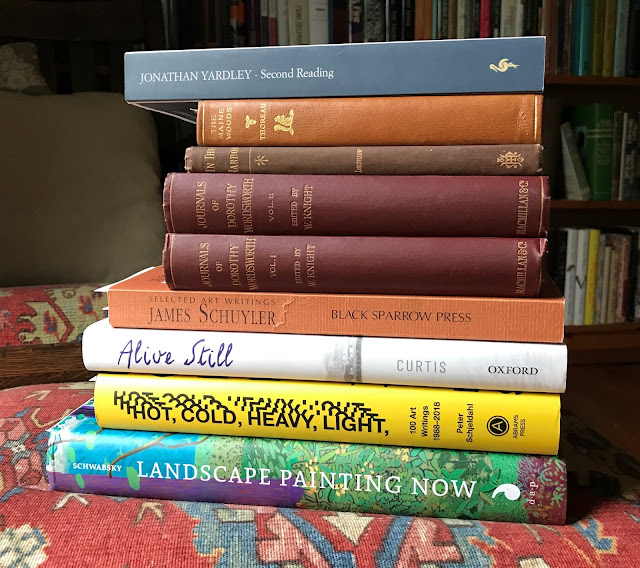 My most recent stack.  There are others nearby but I have made significant inroads here.  I did just finish Alive Still: Nell Blaine, American Painter by Cathy Curtis (Oxford 2019) and the monster Barry Schwabsky art book Landscape Painting Now (d.a.p. 2019), and have just begun Peter Schjeldahl's Hot, Cold, Heavy, Light: 100 Art Writings 1988-2018 (Abrams 2019).  This may be some kind of record for me, reading three brand new books one after another.  Usually I am decades if not centuries behind.  If there is such a thing in the continuum of reading, which seems to wash in and out, back and forth, like the tide.  Don't good books always feel relevant, no matter their age?

I don't need an answer to that question.  Old books continue to draw me in, as they have ever since I learned to read.  I took the leatherbound reprint of Thoreau's In the Maine Woods (Houghton, Mifflin 1893) on a camping trip we took for Ryan's birthday last week.  And I was in an antiques barn in western Maine a few weeks ago and in one of the book rooms I saw the thin Longfellow first edition and the Dorothy Wordsworth two-volume set.  I do not need these books, I said to myself as I stood there holding them in my hands.  Wanting them.  Story of my life, right?  I already have several Longfellow collections;  I already own two different versions of Wordsworth's journals.  I put the books down.  Then I moved along, as if to leave the room they were in.  They waited patiently for me to change my mind.  Which obviously I did.  And I have no regrets!  Longfellow's In the Harbor (Houghton, Mifflin 1882) is a little shabby but aren't we all, these days: 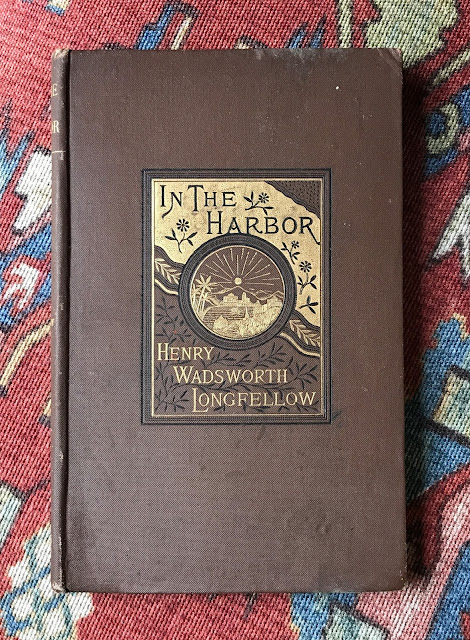 Such a wonderful front cover.  The insides are good too.  In the shop I opened it at page 79 and read the following poem:

I am aware
How many days have been idly spent;
How like an arrow the good intent
Has fallen short or been turned aside.

But who shall dare
To measure loss and gain in this wise?
Defeat may be victory in disguise;
The lowest ebb is the turn of the tide.

Phew.  That pretty much did it, that and the exquisite print job by The Riverside Press.

Dorothy Wordsworth (edited by William Knight, Macmillan 1904) is in better condition, but she has problems of her own.  So after proclaiming I had no regrets about these purchases I must eat my words, because I do in fact have one.  A not insignificant one.  Behold: 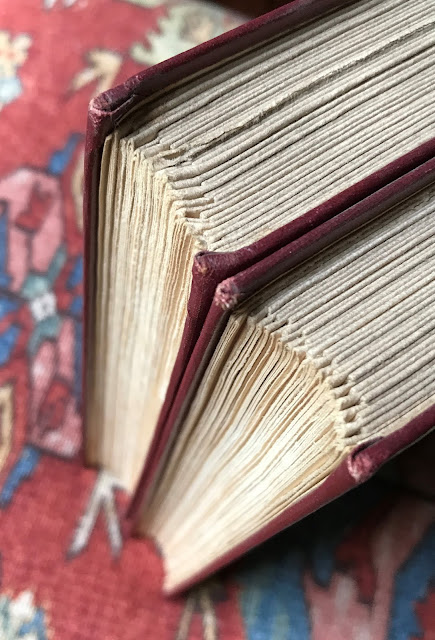 Oh good printers and binders of Macmillan, Why did you not trim the margins?  To read these lovely volumes I will have to live with a paper knife in one hand, because every signature remains uncut along all the top edges and half of the fore edges.  Will I actually do this?  I have to wonder.  The set runs to about 550 pages all told, whereas the other edited editions I have of her Journals are much shorter.  Which is why I bought this set, aside from its general handsomeness.  (Keep this longer set, sell the other editions - that's one way I justified the purchase.)  I also love its bookplates, one centered inside the front cover of each volume, with just a woman's name printed in copperplate script on good paper, with splashes of darkening glue around the edges.  I think I'll paste my own inside the back covers.  Then if I never read this edition (all that slicing! I don't know if I can do it! rip rip rip!) some future booklover will wonder why two supposed bibliophiles never read this set.

But no, I do have to cut the pages, because in browsing through what little I can read of it just now, I see that volume two ends with Extracts from Dorothy Wordsworth's Tour in the Isle of Man 1828.  Which I dearly want to read, being fascinated as I am with all things Isle of Man.  It's been a while since I've mentioned that, I'm sure.  But I am in fact part Manx and would love to visit someday.  Another island in another sea.  Some Faraghers emigrated in the 1850s, first to Canada, then to the United States, and my particular branch of that family tree is alive and well.  Now I know that Dorothy Wordsworth visited the island when my ancestors were still there!  Thrilling to contemplate.  I need a sharper paper knife.

That's all I've got for the moment.  The other stacks will have to wait.  I have a few forthcoming books on order too, and my inner eye is beginning to focus on possible winter reading projects.  Anthony Powell is still in the running but I might find someone or something more catastrophic or apocalyptic to read instead.  Because I can't decide if I need something truly horrendous to remind myself that humans and the world suffer, yet here we still are, we endure, or if I want to turn away from that, toward the comforting and tender instead.  Love wins, right?  I've always believed that.  I may have to choose the side of comfort.  We seem to have enough catastrophe readily on hand.  But.  Chin up.  When things get worse we can pack up Longfellow and Thoreau and take to the woods, can't we?  See you there. 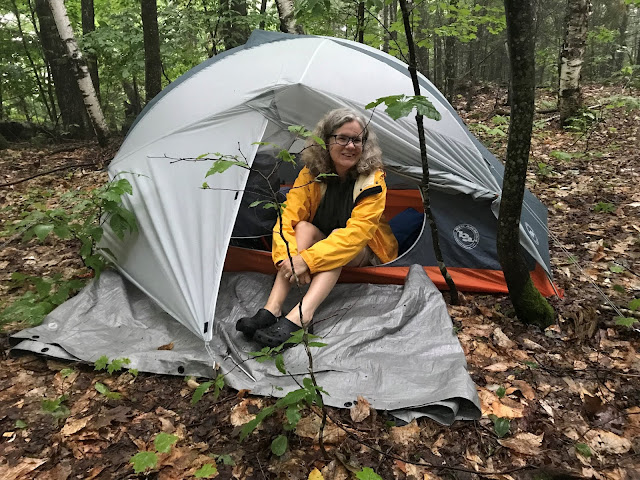