As I peer into 2020 through new glasses, the world seems in sharper focus than ever before.  I have been working intensively for weeks - weeks I say - on my island painting book and it is looking good to me.  More or less.  At over 100,000 words, and 300 pages, I am slightly sick of myself and need to take a break between draft edits.  This is without doubt the most difficult creative project I have ever attempted.  And I used to set type, print by hand, illustrate, and bind my own books!  I have made paintings that are six and eight feet long!  But this, this is much harder.  Good authors make it look so easy.  I wish I knew how they did it.  I will persevere and see it through.  I'm almost at the stage where I will need editorial help, and oh how I am looking forward to paying someone who doesn't know me to read this manuscript and give me some suggestions on what to leave out.  I suppose it's better to have too much material, rather than not enough.  But wow, is it hard to winnow out the dross.

That's the status of that.  On to READING.  I have been listening to and watching some of the impeachment trial, and then sinking with relief into some wonderul books to revive me and remind me that we humans are also capable of this and not merely that.  I attended a nice little library sale in December, right before the holidays, and came away with three cartons of books for a little over a hundred dollars.  One of the items I bought was a Grove Press set of Beckett, which I priced and put into my book booth.  It sold within days.  So gratifying.  Keep the faith, booksellers of the world!  I say that as a pep talk for myself as well as others.

Here is the short stack of books I kept for myself, from the sale.  Plus the book my niece lent me to read, since it was also here on the table: 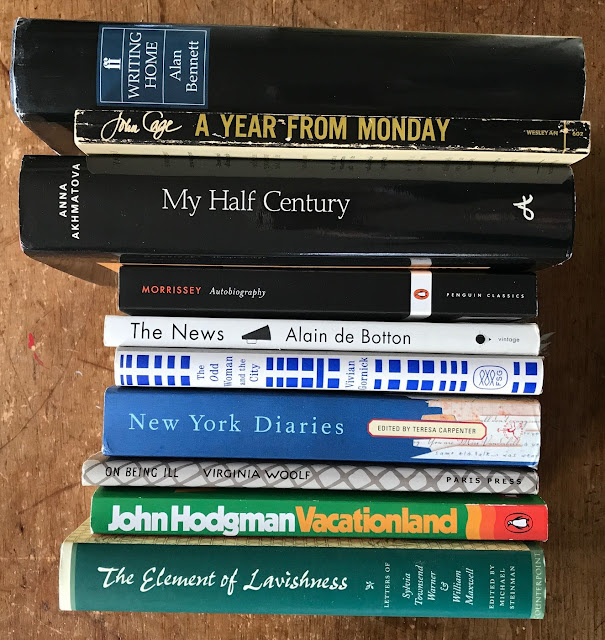 John Cage!  Morrissey!  Virginia Woolf!  Sylvia Townsend Warner!  It was a great library sale indeed.  I did read the book from my niece, John Hodgman's Vacationland: True Stories from Painful Beaches (Penguin 2018) and loved it.  It was just the ticket for my current state of mind.  Which is solipsistic, from working on my own memoir for too long.  To get wrapped up in someone else's was a delight.  What a funny, awful, terrific book.  "Vacationland" is the hapless unofficial motto for the great state of Maine, by the way, for anyone who may not know that fact.  It's on our license plates, so it must be true, right?  Hodgman's use of it is tongue in cheek, since he doesn't exactly talk up Maine and Mainers in a warm and fuzzy way (because we are not, by and large, a warm and fuzzy people).  Then, just when you think he's been sarcastic for long enough, he turns on a dime and melts your heart with some piece of elemental truth, via his own experience.  David Sedaris-ish.  Recommended.

I have yet to read any of the other books in this stack, because I am still wandering the hallways of the New York School, and may be for some time to come.  I stalled out with John Ashbery earlier this month, after reading most of the Collected Poems 1991-2000.  I haven't found the right time yet to read a few of his book-length poems, and I don't want to immerse myself in them until I have hours and hours to do so.  Thus they wait, or I wait.  I'll follow up with him soon.

Meanwhile I'm casting an eye around the book room for some of my favorite titles by the players, outliers, watchers, and other movers and shakers of the time.  These I've read before, and they provide insight and shine sidelights on to the whole cast of characters: 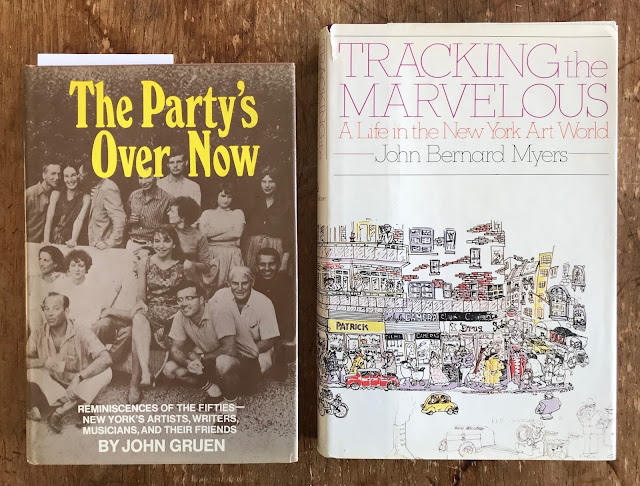 John Gruen's The Party's Over Now (Viking 1972) and Tracking the Marvelous: A Life in the New York Art World (Random House 1983) by gallerist John Bernard Myers are two of the best contemporary accounts of the poets and painters of the time (that aren't written by themselves, I should say).  They are chatty and gossipy in a not-always pleasant way, but they were there, saw what they saw, and lived to tell the tale.

A few more sidelight-books, only one of which I have read cover to cover, and most helpful it is:

The Last Avant-Garde: The Making of the New York School of Poets by David Lehman (Doubleday 1998) is the one I have read, and not just browsed in, like the other two (thank you David Lehman, for helping me overcome my trepidation and even fear of approaching the work of John Ashbery, after all this time).  I have listened to Frank O'Hara read one of my favorite poems of his, however, from the spoken word cd inside the back cover of All Poets Welcome: The Lower East Side Poetry Scene in the 1960s by Daniel Kane (University of California Press 2003), and have gone looking for familiar names in A Secret Location on the Lower East Side: Adventures in Writing 1960-1980 by Jerome Rothenberg, Steven Clay, and Rodney Phillips (Granary 1998), which is a fascinating tour of little magazines.

Throughout the month of February I will continue to track the New York School in my own collection.  The James Schuyler books I already own are up next.  I wish there were more!  I love the best of his poems even more than I love Frank O'Hara's, but luckily it isn't a contest.  At least not for me.  It might have been, for them.  I can't find the quote so will have to paraphrase Schuyler, who said something like this, about the plethora of poets around at the time:  There sure are an awful lot of stars in this opera.  Back soon.