settling in for the long haul


Update from here, before April is gone.  We are about six weeks in to the stay-safe-at-home order in Maine, and state leadership just extended the order through the upcoming month of May.  Then...?  We don't know.  Certain kinds of businesses might be able to reopen in June, others won't.  Summer festivals and public events are being cancelled left and right.  The antiques mall in which I sell my books is closed indefinitely, but the owner, bless him, is charging us dealers zero booth rent.  So my inventory sits in darkness for now.  And my upcoming painting shows are going to be mostly if not only online, it seems.  All of which is fine with me.  We've bought groceries by the email-your-list/curbside-pickup method twice, otherwise have only driven anywhere one other time, to park at a local trailhead a few miles away.  My hand has healed up.  All in all, we're doing fine.  And fear is more or less at bay, though still present.  A low point was an unexpected mini-blizzard a few weeks ago, with a foot of heavy wet snow and an accompanying power outage which lasted a few days.  A high point was walking eight miles around the hill we live on, when the snow was gone and it was much warmer.  I painted watercolors along the way.  Crocus time has given way to daffodil time.  The first dandelions are opening.  Lilacs will be along soon enough.  So it goes.  My mind has settled somewhat and I am working away at my usual slow and steady pace, on all kinds of projects.  I made a good painting yesterday, one I have been thinking about for months.  Happiness floods in whenever I am able to set worry aside and work.  And Ryan is a joy to quarantine with.  He keeps busy with his own projects and work.  His usual good humor abounds and lifts me up.  The days are full, and then they pass by.

I've also started reading again.  Like, really reading.  I began with a little hardcover reprint of Virginia Woolf's stand-alone essay On Being Ill (Paris Press 2002).  Perfect, and perfectly strange, written in its own way, in flowing comprehensible prose.  Her sentences run on, sometimes to entire pages, but she never loses her threads.  The essay was originally published in 1930 by the Woolfs (although Viriginia Woolf often called herself and her husband Leonard the Woolves) at their Hogarth Press.  A brief and perhaps pertinent sample (p.11)

"There is, let us confess it (and illness is the great confessional), a childish outspokenness in illness; things are said, truths blurted out, which the cautious respectability of health conceals."

I don't think I have anything to confess, here or elsewhere.  I'm usually an open book.  But then, I remain healthy (knock on wood).  Although I suppose we could play a game, hopefully brief, called Virus or Menopause?  I am 52 and in the throes of the latter.  Too much information?  Not for an honest diary-writer.  Virginia Woolf speaks of nearly everything, in hers.  I know that now, because I did start reading The Diary of Virginia Woolf, edited by Anne Olivier Bell (Harcourt Brace Jovanovich 1977-1984).  I have the complete set, in five volumes.  These were the last books I ordered online, in pre-pandemic days.  I've ordered two others since then, from Canada, but they haven't arrived yet, and are on another subject, so will be a story for different day.  My progress in Woolf's Diary is like everything else right now: slow, but full of the essential stuff of life.  The savor is present and complete.  It's wonderful to be able to visit her world with her as a tour guide, on the page, as life happens.  This will sound so obvious, but she is an astonishingly good writer.  Her descriptions of friends and acquaintances, her surroundings, and most of all her interior life, including her writing process, are extraordinary.  The Diary begins in 1915, when she is in her 30s, married, and the war is well underway.  She stops writing after a mental breakdown, then resumes.  The war ends.  Hogarth Press begins.  She writes and publishes.  She carries on.  The facts and timeline of her life are so well known that I will not recount them here.  I will say that her nephew Quentin Bell, who wrote a fine introduction to Volume One and was married to the editor of the Diary, says (p.xiii):

"In calling it a major work I wish to imply not merely that it is a large work of major historical and biographical importance (which it certainly and obviously is) but also that, considered as a whole, it is a masterpiece."

He elaborates (ibid) by saying that, like her best novels, the Diary has:

"...the same accurate beauty of writing but also an immediacy such as one finds only in diaries; it is in fact one of the great diaries of the world."

Here is my set, and On Being Ill, on the footstool in the book room: 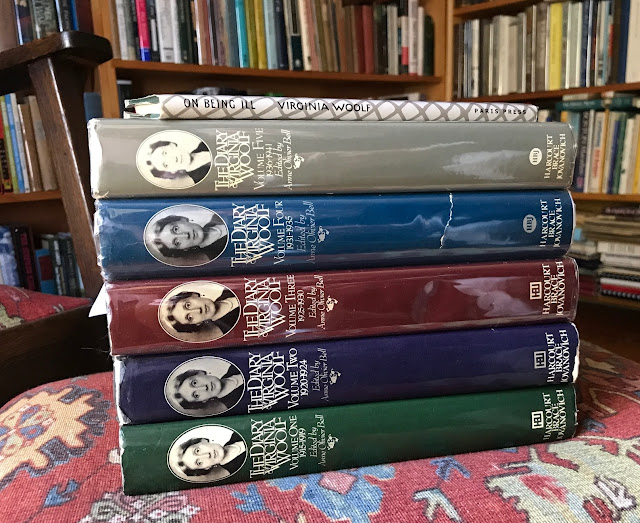 I'm half way through Volume Three, as you see from my bookmark.  The Diary is full of home truths.  Like this one, from Volume One (p.22):

"The future is dark, which is on the whole, the best thing the future can be, I think."

For good measure, here is the rest of my Virginia Woolf collection, if I can even call it that.  I've had a lot more books of hers, and sold them or at least offered them for sale, after not reading them for decades.  That has changed, however, and I'm certainly glad now to still have these on hand: 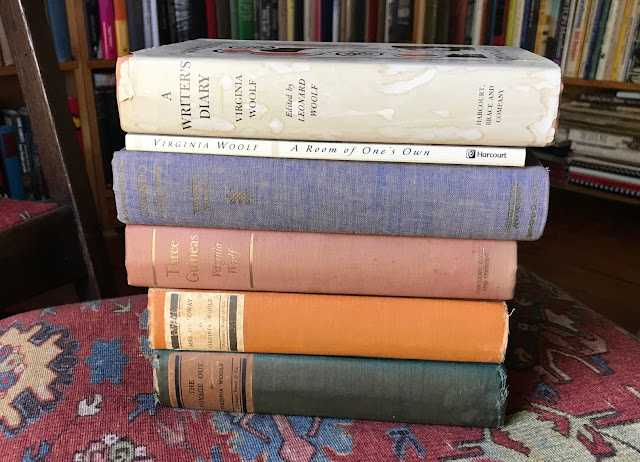 She lives on the shelf between P.G. Wodehouse and Dorothy Wordsworth, isn't that a good place to be?  Let's take a closer look at the book on the top of the pile:  Vanessa Bell designed the dust jacket for her brother-in-law's edited version of her sister's diary: 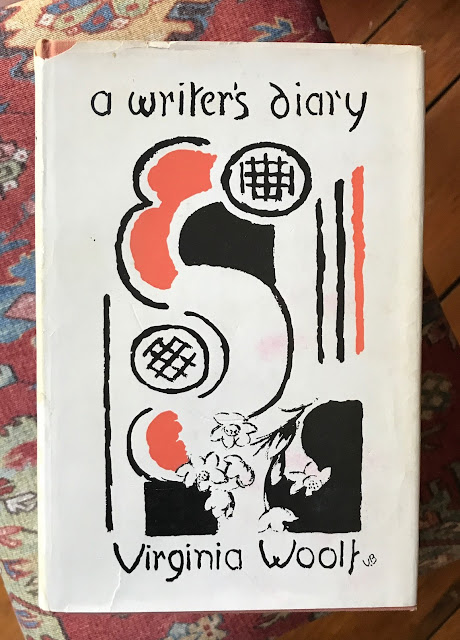 More on the Diary as I continue with it.  Finishing it will take weeks at my current snail's pace, then perhaps I will forge ahead with her early novels.  The only novel I've ever finished of hers is Orlando.  Which I loved, although I don't usually take to fiction which employs surrealist techniques or otherwise suspends the laws of time and space.  However, since these laws seem to be suspended anyway at the moment, why not.  I am planning on re-reading Orlando, because it's been years, and one of the highlights of the Diary so far is Woolf's unfolding description of Vita Sackville-West, as a personage-turned-lover, who is of course Orlando in the novel.  And I do have a long story to tell about this particular copy, and its history and travels, along with some other Sackville-West books in my possession.  Perhaps next time.  I think it's a good story.  It has many branches, will meander, and take a while to tell.

I want to wrap this up with a few more thoughts about the pandemic.  Not from me, though.  Virginia Woolf endured difficult times, to put it mildly.  The war, the influenza epidemic, scarcity, her own ill health, you name it.  A few brief passages stay with me from her Diary, about some of those times.  In Volume One (p.56), during the war, Leonard is called up but is found unfit to serve, but:

And after the war, life returns to something approaching normal, but then a railway strike occurs (ibid p.301):

"We are on war rations, & told to be brave and good.... Yet a state of siege has a certain snugness & self sufficiency about it.  No one can interrupt."

And finally, from Volume Two, this devastating statment (p.72):

"Why is life so tragic; so like a little strip of pavement over an abyss.  I look down; I feel giddy; I wonder how I am ever to walk to the end."

As we know, she manages to stay on the road for a long time.  Until she no longer can, in fact.  Don't look down unless you have to!  And even then, keep your balance: be safe and walk on, friends.  I hope you are well, and remain so.  Let's meet back here in May.