little book in the big woods

Home, I am, after nearly a month away in the woods of northwestern Maine.  Truth be told I've been back from the residency for a few weeks now, but time is acting in strange ways, moving too fast and then too slow, as we approach the election, and winter, and the pandemic continues to spread.  Ryan and I cast our ballots earlier this week and are now praying for positive change.  Yesterday, against the lingering golds and russets of fall, the first snowflakes flew here in an hour-long flurry of white.  They felt hopeful and clean, a fresh start.  I'm looking forward to winter this year, despite all, I have to say.  We are staying put, keeping our heads down, and living each day as if it is a gift, which it is.  I'm casting around for a winter reading project to settle in with.  Most of all, I'd love to read the Journals of Henry David Thoreau, but the in-print complete edition from Princeton University Press is so expensive, and old and secondhand sets likewise, so for now I hunt around for individual volumes and hope to assemble a set over time, as funds and availability allow.  Yes, I know I could read them online, in the 1906 set edited by Bradford Torrey, but as ever, I want actual books in my hands.

I'm on something of a Thoreau journey at the moment, after reading The Maine Woods while I was at the residency.  Which was in Monson, Maine, at Monson Arts, and Thoreau stayed in Monson too, before one of his excursions into the woods.  I have a lovely little leatherbound copy (Houghton Mifflin 1893, Riverside Pocket Edition), which I bought at a book sale twenty years ago, for two bucks.  There are two names written inside the front cover, one from a University of Maine professor I knew when she was in her old age, long-retired.  There's a little bookseller's ticket too, from The Old Corner Book Store in Boston.  It was a great pleasure to read a few pages or more of the book each night, after being outside painting in landscapes very similar to what Thoreau saw when he was here.  In many of my paintings I ignore such things as power lines, telephone poles, buildings, or rather I look past them, to the forms of nature, and the horizon.  Everything else seems of the moment, transitory.  Nature always wins, is one of my life mottoes.  Even though nature is ephemeral as well, but in a more cyclical way.  Anyway, here's The Maine Woods, along with the rest of my current reading: 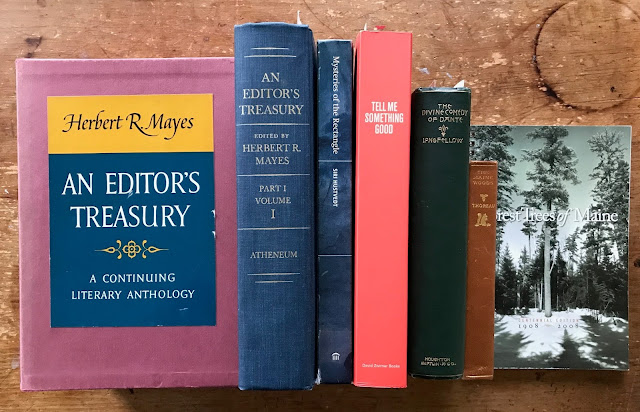 Forest Trees of Maine is the other book I paid close attention to in Monson.  This spiral bound version is fantastic, it's the Centennial Edition, 1908-2008, published by the Maine Forest Service.  We own two copies at the moment, and I use it to identify the varieties of the trees I've been painting.  As far as the other books go, I'm still reading Tell Me Something Good: Artist Interviews from The Brooklyn Rail (David Zwirner Books 2017), one section at a time, and just finished Siri Husdvedt's Mysteries of the Rectangle: Essays on Painting (Princeton Architectural Press 2005).  And yes, here is Longfellow's translation of The Divine Comedy (Houghton, Mifflin 1895, another lovely Riverside Press edition), which I almost conviced myself would in fact be my winter reading project this year - different translations of Dante - appropriately doomy - but once I began I found I couldn't stomach even the lead-ups to hell, which seem bad enough.  Scourges, bloodshed, suffering, torment: is this what I want to read about right now?  No, it is not, not even couched in the beauty of poetry.

I set Dante aside for now, cast around for something else, and came up with the Herbert R. Mayes set, which I've browsed around in before but never really sat and read cover to cover.  Because it's massive.  Two volumes, each over a thousand pages:  An Editor's Treasury: A Continuing Anthology of Prose, Verse, and Literary Curiosa (Atheneum 1968).  A closer view: 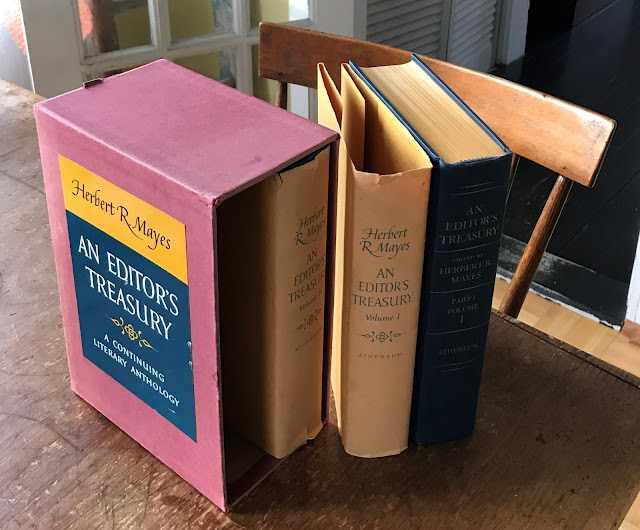 It's a very well-made set.  I mean solid, with a full cloth cover, strong binding, and excellent paper.  Oh for the days when publishers created books such as this.  Surely it was a vanity publication, a huge bibelot I thought would be The Practical Cogitator anthology times ten,  And it sort of is, but was published about two decades later, has no set arrangement as does the Cogitator, and is more inclusive, although still primarily drawn from the white male canon.  But I turn the page and find Martin Luther King, and turn another to read the words of Oscar Wilde, then Elizabeth Cady Stanton.  I check the voluminous index of authors at the back of Volume II and see Christopher Morley (as I first noted here in 2006!), and Montaigne, and Jane Austen, Dorothy Parker, Billie Holiday. Edward R. Murrow, P.G. Wodehouse, and Pepys, and hundreds of other names and sources recognized and not.  The books contain literary quotes that Mayes noted and saved from other books, and newspaper and magazine sources, about law and government and policy, in no particular order other than how he wanted to arrange them on each page.  At the time of publication Mayes had worked as a magazine editor for four decades, and says in his introduction to Volume I (p.vii):

"I have read with pleasure almost anything that came along.... Because of the nature of my work, no small measure of reading, good and bad, was obligatory; yet from the mountains of manuscripts and books that have crossed my various desks, and from the many more I have otherwise known, there has come much contentment and very little ennui."

He continues (pp.vii-viii):  "I have read, and continue to read, anything and everything, from books to billboards, from pamphlets and essays and histories and speeches and biographies and plays, to package labels and greeting cards.... If indulgence in literary fare so varied has made for a seeming and perhaps actual deficiency in discrimination, it also has made for a sufficiency of general information about people and places and ideas and things, and provided a nourishment that has gratified me; and this sampling of it may be a source of satisfaction to others."

About the catch-all nature of his anthology (p.viii):  "In the arrangement of material, as with the selections, the policy of reasonable judgment - mine - has been used."

He meant these to be the first two volumes in an ongoing series of such anthologies, but though he lived nearly another twenty years, I see no evidence of any others being printed.  Perhaps he decided that this set was enough, or perhaps the publishing business changed around him and no longer supported such endeavors.  It seems to me that Mayes could have continued if he'd wanted to.  Apparently he had an explosive personality.  This interesting blog post from When editors were gods has one scoop.  Also, a note about Mayes's life in the back of Volume II tells us that TIME magazine called him "brilliant, bellowing and belligerent."  If this anthology is any indication, he had a mind hungry for every experience life has to offer.

Thankfully, my scattershot brain can handle this set at this time.  Piecemeal works for me.  I read for an hour or so, and visit with Bertolt Brecht, Herodotus, and Anita Loos, and feel a little bit better about life with every page.  I'll continue on with it while I attempt to assemble a Thoreau set.  More on that as the situation develops.  Meanwhile, stay well, VOTE, and thanks for reading.