Another month!  Like the last, except slightly warmer!  I've been out painting (in the car, yes, but with the window rolled down), and birds of spring are returning to our yard (saw the first song sparrow this morning, under the cedars), and the snow is nearly melted away (some blue ghosts remain at the edge of the field).  I've set Thoreau aside for now; I never did finish Volume Seven of his Journal.  I'll get back to it another time, I hope.  From what I read in the Thoreau biography about how it progresses, I'd rather leave him here now, before he gets much older, darker, and sickly.  Perhaps around 3000 pages of the Journal is enough for one winter.  All in all he's been a most excellent readerly companion, over these last few months.  I opened my own diary at random to see if I could find a quote or two to illustrate this, but instead saw some passages I'd copied from Emerson's tribute to him in the Riverside Thoreau collection Miscellanies (snippets from pp.18-23):

"It was a pleasure and a privilege to walk with him.  He knew the country like a fox or a bird, and passed through it as freely by paths of his own.  He knew every track in the snow or on the ground, and what creature had taken this path before him.  One must submit abjectly to such a guide, and the reward was great.  Under his arm he carried an old music-book to press plants; in his pocket, his diary and pencil, a spy-glass for birds, microscope, jack-knife, and twine.  He wore a straw hat, stout shoes, strong gray trousers to brave shrub-oaks and smilax, and to climb a tree for a hawk's or squirrel's nest.  He waded into the pool for the water-plants, and his strong legs were no insignificant part of his armor....  His power of observation seemed to indicate additional senses.  He saw as with a microscope, heard as with an ear-trumpet, and his memory was a photographic register of all he saw and heard.  And yet none knew better than he that it is not the fact that imparts, but the impression or effect of the fact on your mind.  Every fact lay in glory in his mind, a type of the order and beauty of the whole....  His eye was open to beauty, and his ear to music.  He found these, not in rare conditions, but wheresover he went."

The essay-slash-obituary is very moving, however Emerson also says that Thoreau lacked the kind of ambition that he, Emerson, wished that Thoreau had possessed, so he could be a leader on the world stage, "...engineering for all America," rather than merely "...the captain of a huckleberry party." (p.29)  I tend to think, after reading many places that indicated as much in Thoreau's letters and writings, that Thoreau did not seek that kind of power, ever, and mistrusted it, and disliked it.  He looked and looked, but didn't see anyone like himself in literature, or politics, or even society in general, and subsequently traveled his own path.  And wrote into existence a new way of being in the world.

In his Civil Disobedience (also printed in the Riverside Miscellanies p.146), he says "I came into this world, not chiefly to make this a good place to live in, but to live in it, be it good or bad."  Take that, Emerson!  Also (p.156): "I was not born to be forced.  I will breathe after my own fashion.  Let us see who is the strongest.... I am not responsible for the successful working of the machinery of society."  And that!  Phew.  And yet, here he is, in his life and writing: pointing, forcing the issue, attempting to open eyes wide.  Bracing stuff.

I always feel like there is much more I could say, and want to say, but there's only so much time, and we have to go pick up our grocery order soon, and then I have paintings to finish, in my studio.  So I'll leave Thoreau for now, in a stack of unfinished reading, with many bookmarks throughout.  There's a new stack at my elbow, as we speak, with nary a Thoreau title among the many: 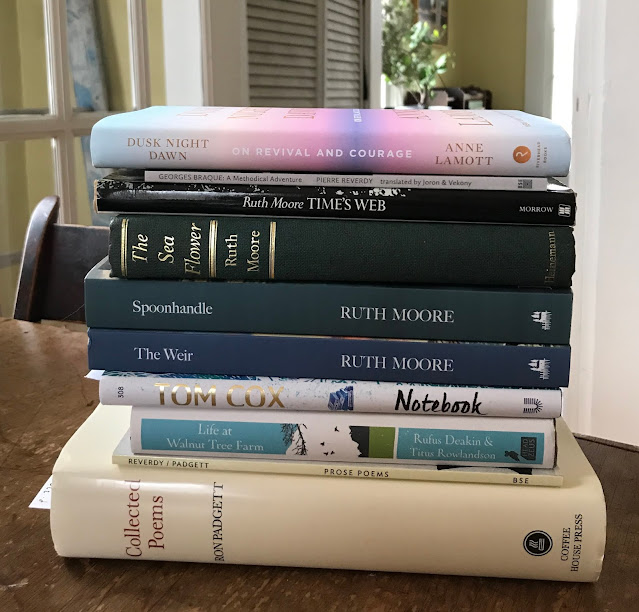 Mmmmm, new books.  Nothing like them.  I ordered up a storm in January, and this is some of the fruit, to mix metaphors.  Let's look at two more closely: 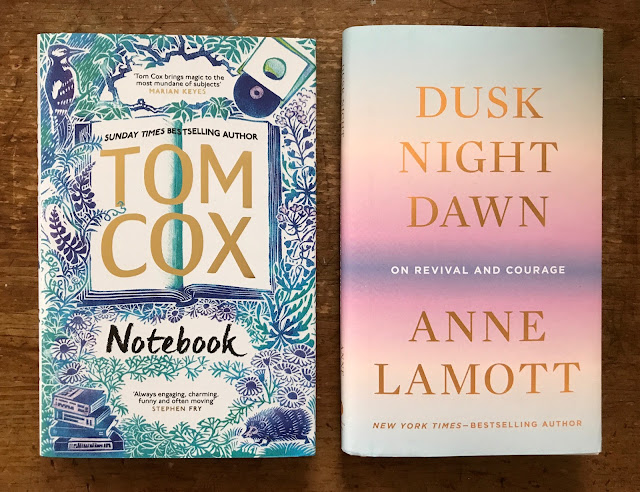