Our cat Hodge, adopted earlier this year, has settled in nicely at home and now, one might say, the world revolves around him. Which is as it should be. Exhibit A: he has trained me to move his favorite cat bed (i.e. old padded chair seat cover) across the floor, following the patch of sun as it progresses during the day. He is quite comfortable with this arrangement, as you can see: 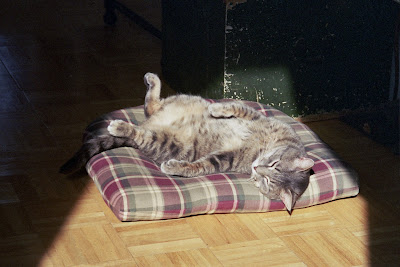 Sun on the belly, ah. Although he wakes us up around four a.m. each morning, he is quite ready to go back to sleep right around the time we either head into town to work, or finish breakfast, depending on what day of the week it is. I particularly like this photo - please note the fangs barely showing: 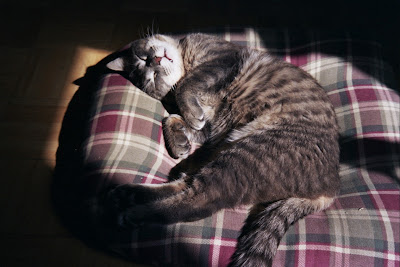 He can sleep like this for most of the day, occasionally opening an eye or two to supervise any projects happening in the same room. Watering the plants, say, or having lunch. Here comes the shade - time to move my cushion over: 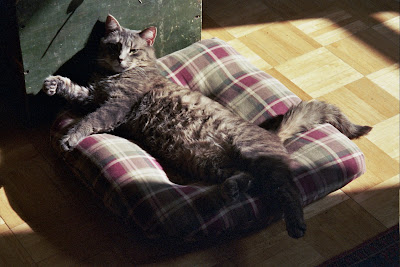 I can't believe I'm putting pictures of the cat on my blog. Well, it's been a slow week. I've got nothing else. Besides, just look at him. A dear. I do love him so. Even at four a.m., hard as that might be to believe. (Ok, sometimes I do quietly threaten to return him to the cat store, but only if he scratches me on the top of the head before four a.m., in an attempt to wake me up. Which always works.)

I prepare my own canvases to paint on. For those who don't know, the hapless painter visits the art supply store and buys rolls or sheets of canvas and many wooden stretcher bars. Takes them back to the studio, fits four stretcher bars together, squares off the corners, cuts and stretches and staples or tacks the canvas on to the bars. Then puts at least two coats of gesso on the canvases. Voila. Yesterday I visited the art supply store. This afternoon I spent two hours picking bar code stickers off every one of the wooden stretcher bars. All 68 of them. Arg. I swear, it's the little things that drive one mad. The stickers shredded, every one. Loud house music helped. And cursing.

Another fussy job: I've been sorting and packing books in the shop, off and on for the past several weeks. Here's the routine: every book must be taken off the shelf, scrutinized (when did I buy this, how much did I pay for it, what did I price it at, what must I now price it at to sell it at the antiques mall booth, could I sell it online, do I want to read it, will anyone ever buy it at any price), placed in one of several boxes or piles (home, internet, goodwill, antiques mall booth, possible antiquarian bookfair). Every single book. Some sections are easy. I rescue a few great books, and a few valuable books, and the rest gets marked down and goes straight to the booth. Most, though, not so easy. And loud house music does not help. Nor cursing. In fact, distraction of any kind is distressing.

My frontal lobe is weary.

We were driving in to town today and I was rambling on about what in the world am I going to do with all of the huge bookcases in the shop (having too many empty bookcases is certainly not a problem I've ever had before, do you see), and Ryan suggested we take the backs off a few of the nine-footers and use them for raised beds in the garden. Heh. They would indeed make very nice tidy rows for lettuces, carrots, beets, cabbage. I wonder if the polyurethane would be bad for the soil...? Like the bookshop, it's seven years old and has mellowed somewhat. Seriously, though - I have a bookcase dilemma. What to do. I can fit some in at the house. I'm contemplating storing the others in case (no pun intended) I find I must reopen elsewhere because I miss the book madness too much. Besides, we built all these bookcases ourselves, and they aren't fancy but they are sturdy and still have many years of service left in them.

Back to the garden - I planted four rows of potatoes (two each of red and white) and one long row of sweet peas and sugar snap peas last week. The rest of the veg goes in at the end of the month. As I look around the bookshop, I realize that much of my inventory is now worth, according to Amazon, ten cents or less per book. So should I use some pulps for mulch? Again, kidding here. Still, would be cheaper than buying bags of compost.

I was in the supermarket the other day and a great song started playing on the muzak, a song I loved and used to dance to at my favorite club back in the 1980s when I was a punk art student. Fast forward twenty years and here I am looking at the organic pasta sauce, listening to that same song, suddenly feeling the same emotions I used to feel back then. No, feeling them even more intensely than I did then. I could hardly stand it. I couldn't read the label on the pasta because my eyes were misting over. No one told me about this part, I thought. Or people did, at least in books, but for some reason I didn't understand what it meant. Because I was a kid?

Man, the getting older thing, it's rough sometimes.

The news from here. The cat's out of the bag because I've already told a bunch of people, but here it is in public, so to speak: I've closed my bookshop. A good portion of my inventory has already migrated up the street to the antiques co-op, where I rent a booth. More will follow. The dismantling is just beginning. Many of my bookcases are nine feet high and I'm going to have trouble finding new homes for them. I think I'll put some in storage in case I decide to reopen in the future.

Now, listen here. Don't Cry For Me, Argentina, because the sense of freedom I'm feeling is a deeply wonderful thing. Seven years I've been here and I simply need a break from listening to people's stories, and from scraping the overhead together every month, which has gotten harder and harder. However, I do not consider this a failure in any way, shape, or form, because I could continue to scrape by, if I chose to do so. But I do not choose to do so, right now. I've loved having this shop, and I can honestly say there isn't anything else I would rather have done with my time. To be able to say that, that's not bad. Anyway, I'll still be a bookseller, part-time - I'll keep selling a little online, and in the antiques mall, and at the antiquarian bookfair in Maine in September. The other part of the time, I'll be weeding the garden, and painting at the easel - and I've got some great news about that - I've been accepted at an artist-in-residence program for the fall. I go to Connecticut for the month of October. Change! I swear to God, you make one, and others stampede in right behind it.

I'm not going to say what that song was. The one I heard in the pasta aisle. Chances are, you've got your own.