I wanted to write and wish everyone a warm and happy Christmas, and I was planning to do just that, but nature intervened.  Three days before Christmas an unusual kind of storm started brewing around here.  Something to do with layers of warm and cold air in uncommon positions in the atmosphere.  The air temperature was well below freezing and yet heavy rain fell at times, not snow.  And then the temperatures got even colder.  Sub-zero at night.  So on Monday morning Ryan and I walked around our neighborhood marveling at the ice covering everything.  Maybe half an inch.  Stunning, if one could set aside its hints of treachery. 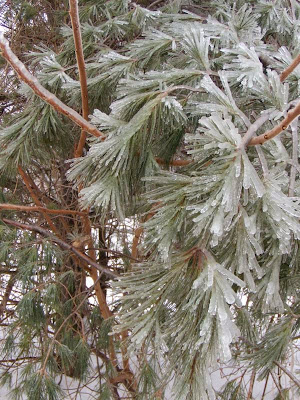 Every pine needle, every blade of grass, every twig and berry outlined in glassy cold ice.  So beautiful. 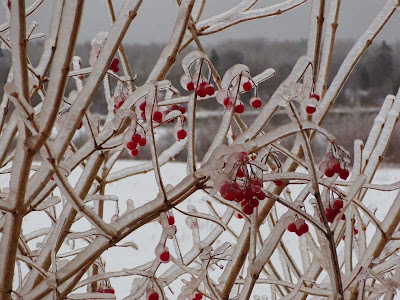 As the day went on, though, more rain fell.  It was foggy, too.  We thought the storm was over.  But no.  Surprise, surprise.  The ice built up and built up until tree limbs bowed and broke under its weight.  The big maples out front were no exception.  The ice was about an inch thick at this point, more in some places.  Here I am (in the middle distance) looking at some of the damage. 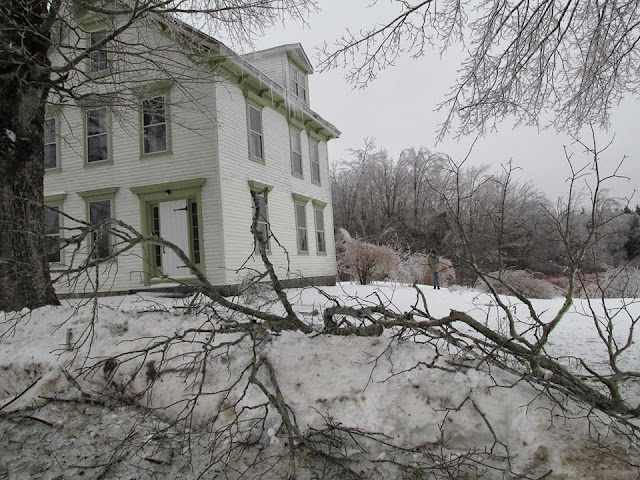 On the other side of the house, one of the maple limbs came down and took our power lines with it.  We had no electricity for a day, and no phone until last night.  The same thing happened up and down our street.  What a mess.  But everyone is safe, and I am so grateful for our woodstove, which kept us warm, and kept the water pipes from freezing.  I'm also grateful for the extraordinary utility workers who gave up their Christmases to work around the clock all over downeast Maine.  We certainly didn't expect to get any services back as quickly as we did, another surprise.  We ended up having a lovely Christmas Day with two different branches of our families.  And now a few inches of new snow is covering the ice, which has not melted and is still causing trouble for people all over this rural area.  I hope everyone is warm and safe.  Prayers and blessings on us all.

And one book-story, for Christmas.  Before the storm, Ryan and I went on a gift-hunting excursion together, through several nearby towns, and we split up a few times during the day to run secret errands.  At the end of the day I arranged to meet him in a local bookstore.  He came in and found me holding a big book.  I said, "I know I shouldn't be buying anything for myself right now, but I don't think I can leave the store without this, forgive me!"  He looked at me and at what I was holding and said, "That's the book I've been trying to find for you all day!"  He'd already asked for it in other places and no one had a copy.  He knows me better than I know myself, since I didn't even know it had been published yet.  But he knew.  I talked him into wrapping it up for me and putting it under the tree.  I don't need to be surprised.  In fact so often I'd rather not be.

when one favorite author mentions another


A warm glow of approval for both ensues.  I am recklessly diverging from the bedside table books and reading Ronald Blythe again instead, and of course he mentions everyone worth mentioning.  Last year at this time I read his good opinion of Lord Byron's journals, after reading Byron's good opinion of Samuel Johnson, and now I read that Blythe also has a good opinion of Samuel Johnson, in fact Johnson was his boyhood hero.  It's all here in this site devoted to making Blythe's gloriously discursive Church Times column, Word from Wormingford, more widely available.  I love this site (and may have mentioned it before), but I always feel a little guilty reading it, knowing that the Church Times is available by subscription only.  Well, what's the holiday season, after all, without a little side of guilt.  I toss up a brief apology to the literary angels, should there be any, and read on.


This week I somehow attained near-perfection, regarding the books-on-the-bedside-table pile.  It would have been perfection itself, I think, but for the absence of fiction.  One novel would have made the difference.  Elizabeth von Arnim's The Enchanted April did make a quick appearance but is no longer in residence, because I finished it so quickly.

Everything else lingers - so here is what I am currently reading.  I'm in the middle of all of these books, except the very last one mentioned, and I will be happy to pick any one of them up this evening and commence reading where I left off.  Now, to start a good bedside table stack, one must begin with something substantial as a base.  An anchor.  Thus, at the bottom:

The National Trust Great English Homes:  Ancestral Homes of England and Wales and the People Who Lived in Them by Mark Bence-Jones (British Heritage Press 1984).  The first part of the title sounds so dry, does it not? but the second part of the title tells a different story.  Totally un-dry, and so browsable.

Next, the equally tall but oddly less-wide:

Long Walks in France by Adam Nicolson, with photographs by Charlie Waite (Harmony Books 1983).  Are there still walking paths all over rural France?  I don't know, but in this book there always will be.  Wittier than it should be, but what else are we to expect from Vita Sackville-West's grandson (rhetorical question)?

Then a few of your average-sized book-books:

The Life of Maynard Dixon by Donald J. Hagerty (Gibbs Smith 2010).  Gibbs Smith's motto, on the title page is:  to enrich and inspire humankind.  Love that.  The book is good, too, so far.  I knew nothing about this western painter, other than having seen a few of his illustrations and landscape paintings in reproduction.  I bought this and the recent monograph of his work at the same time (the monograph is TOO BIG for the bedside table - it would cause both the pile and the table to founder).  Holy crackers he was a good painter of clouds, and big open spaces.

Interaction of Color by Josef Albers, 50th Anniversary Edition (Yale University Press 2013).  I should have read this classic when I was an art student.  Never too late, I say.

And two that are average size yet absurdly thick:

Ripe: A Cook in the Orchard by Nigel Slater (Ten Speed Press 2012).  593 pages!  I'm on page 205!  Soporific, luscious prose.  With recipes.  The companion to his equally beautiful book Tender.

And lastly, something diminutive to cap off the stack in a tidy mountain peak of sorts:

The Paper Garden: An Artist (Begins Her Life's Work) at 72 by Molly Peacock (Bloomsbury 2010).  Nearly 400 pages, but only about eight inches high, so it seems smaller.  I already own two other books about the indefatigable eighteenth-century collagist Mrs. Delany, now this makes a third, and I can't wait to read it.  The dedication page reads, in part, for "all those for whom it's never too late" (see Albers, above).

Except for an ever-present book of New York Times Sunday crossword puzzles (sometimes I can't face reading words in full sentences, and prefer them broken up a bit), that's it.  Late this fall I finally banished Benjamin Franklin and Samuel Johnson from the room, their letters had been loitering on the bedside table for some months, started but unfinished, and I needed a clean sweep.  This current stack touches upon many of my ongoing interests - armchair travel, long walks, unusual biographies, the English, art, painters, and food.  Pretty basic stuff.  (I did just finish the three volumes of Siegfried Sassoon's Diaries, but I had to keep those across the room on a dresser-top, to avoid a landslide.)  Here they are: 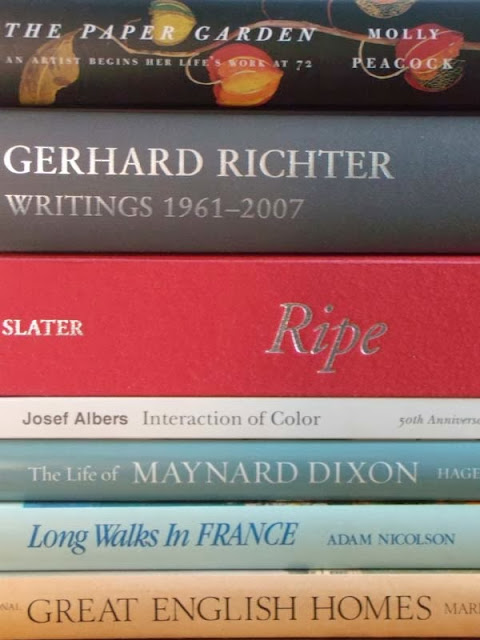 I know it won't be long until these books are supplanted by others.  But for now, my version of just right.


A search throughout the book room here at home for more to do with E.M. Forster has led me to revisit a three-volume set I first read around fifteen years ago (how's that for a convoluted sentence).  Poet, novelist, memoir-writer Siegfried Sassoon's Diaries 1915-1918, 1920-1922, and 1923-1925 (Faber & Faber 1981-1985).  Sassoon corresponded with Forster a bit, and they became friends after the war.  The Diaries are peppered with mention of him, especially the last volume, but I soon became engrossed in them for their own sakes.  I particularly enjoy Sassoon's running commentary on what he is reading.

"...reading a hundred pages of Bleak House, which is superb.  Dickens may be too sentimental at times, but when he writes like that he is, to me, intensely moving.  And his descriptive writing is as fine as anything I know.... I have just hurled Ziska (a novel by Marie Corelli) out of the window.  What a curious fluttering noise the pages made as the red-bound 1887 Tauchnitz volume curved and collapsed on to the grass in the courtyard...."

I have never yet tossed a book away in disgust (the famous Dorothy Parker quote of course comes immediately to mind, except, it appears She didn't actually say it...?).  I've come close.  To circle back to Forster, though, this passage of Sassoon's reminds me of the Merchant Ivory film version of A Room with a View, specifically Eleanor Lavish's potboiler novel about a romance in Italy, Under a Loggia - the copy left outside at Windy Corner, the copy that leads to the unraveling of Miss Lucy Honeychurch's engagement.  But I digress.  As usual.  Not that there was anything else I was going to say, other than how delightful literary entanglements are, and the associations they bring to mind.