In 1867 Samuel Clemens writes to his family:

I know I ought to write oftener... & more fully, but I can not overcome my repugnance to telling what I am doing or what I expect to do or propose to do.  Then, what have I left to write about?  Manifestly nothing."

"I have got a thousand things to do, & am not doing any of them.  I feel perfectly savage."

And so it is with me.  Life has been overfull lately and having already lived it, I don't particularly want to talk about any of it.  I will return to discuss books soon, however, as always.   Though I will just say that I am three volumes in to Mark Twain's Letters. And they make me deeply happy.  I think Valentine's Day will be a perfect time for a discussion about Clemens's courtship letters to his future wife.  He was minding his own business, living the life of a vagabond journalist and confirmed bachelor, then he met a certain young woman, the woman in fact, and fell over a veritable cliff of love.  Blindsided.  A total coup de foudre.  He wrote her exceptional love letters for months and months, and then they married.  Most satisfactory, first in life and now on paper!  More to follow.


Well, here is the Autobiography of Mark Twain Volume 2 in all its glory.  Another gorgeous doorstop of a book, just published a few months ago, 776 pages, with a slightly larger typeface throughout (thanks be): 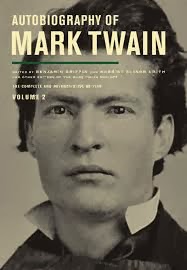 I love this image of Sam on the dust jacket, just a young man here, with so much of his living and nearly all of his writing still ahead of him (which he doesn't look too happy about, and unbeknownst to him he will have good reasons to be so).  This second volume comes across as having much more meat on its bones, as a narrative, than Volume 1.  Twain seems to settle in to the dictation, not to mention warm up to it, and has his say about writing, publishing, contemporary events, religion, and particularly people.  He really lets a few old friends and enemies have it.  Often his scathing sentences take my breath away (p..417):

"In the early days I liked Bret Harte, and so did the others, but by and by I got over it; so, also, did the others.  He couldn't keep a friend permanently.  He was bad, distinctly bad; he had no feeling, and he had no conscience."

"I have said more than once, in these pages, that Harte had no heart and no conscience, and I have also said that he was mean and base.  I have not said, perhaps, that he was treacherous, but if I have omitted that remark I wish to add it now."

He spends much time with Harte, and after demolishing his character - both social and literary - in great detail, he turns the other cheek and lets Harte be himself - a rascal according to his nature, and indeed since that is his nature how could he be otherwise.  But Twain doesn't always speak with such wrath, thank goodness.  He gives us many vivid and loving portraits of people he knew throughout his life.  From his early days in the west, he describes Frank Fuller, acting Governor of Utah Territory (p.38):

"He was an alert and energetic man; a pushing man; a man who was able to take an interest in anything that was going - and not only that, but take five times as much interest in it as it was worth, and ten times as much as anybody else could take it in - a very live man."

Then this, about friend and author William Dean Howells (from the explanatory notes pp.533-534):

"For forty years his English has been to me a continual delight and astonishment.  In the sustained exhibition of certain great qualities - clearness, compression, verbal exactness, and unforced and seemingly unconscious felicity of phrasing - he is, in my belief, without peer in the English-writing world."

And oh how he speaks of his beloved wife, Olivia, called Livy (p.28):

In their household he was called the King by his children, but he was apparently always boyish and the nickname his wife bestowed upon him was Youth.  He said Livy's death was "...the disaster of my life..." (p.80).  At one point he sees a death notice for an old acquaintance in the paper, and remarks upon it (p.277):

"It is another tragedy.  Apparently, broadly speaking, life is just that, simply that - a tragedy; with a dash of comedy distributed through it, here and there, to heighten the pain and magnify it, by contrast."

Maybe that's why the dust jacket image of him seems so right.  As a youth, he gives his own future, and us, a straight hard look.  The famous humorist is not in evidence in this image, and while his autobiography contains many flashes of levity, there are much stronger currents of anger and sorrow throughout.

I hope these scattered quotes give some sense of how fascinating this book is.  Twain is so well-known that it is hard for me to know how to talk about his life and work, at all.  One phrase jumped out at me, though, as I read along - at one point Twain sets his daughter Clara to find a certain work in progress for him, something begun and then set aside long ago, and says (p.199):

"...she would find it among the manuscriptural riffraff in my study somewhere."

Both volumes of this Autobiography are worth reading for phrases such as that alone.  As if we needed just one reason.


I would like to say that the books on my bedside table have been all I've been reading.  I'd also like to talk about a few of them that I've finished reading, and even go into some depth, with commentary, effusion, and quotations (Nigel Slater's Ripe: A Cook in the Orchard, for instance, which contains fabulous sentences such as these, on page 360:  "The flesh of a ripe pear is giving and its effects on the eater calming.  It is the most serene of fruits and often brings about a certain thoughtfulness.").  These books deserve full and fulsome reviews, each of them, but instead everything must make way, because the personality of personalities has driven all else out of my mind.  A huge personality, a super-sized American personality. I speak of Samuel L. Clemens, Mark Twain.  While reading the first two massive volumes of his three-volume Autobiography in the past two weeks (Volume 3 will be published in another two years), I can't decide what name to call him by.  Mark is so sharp, and Sam so soft.  The longer I read, the more I am beginning to prefer Sam.  Here he is: 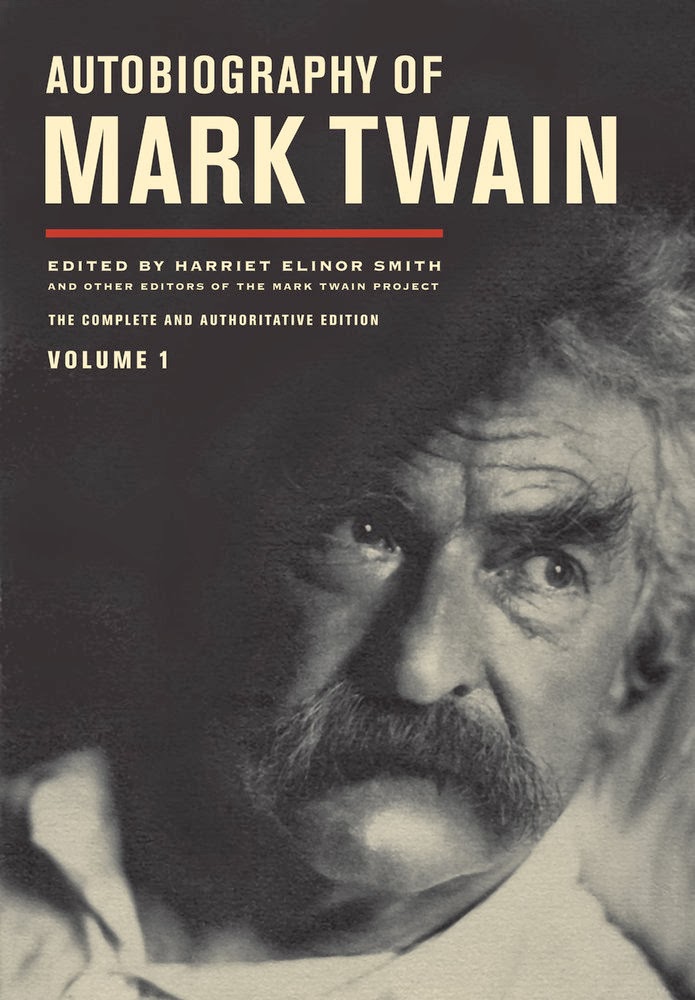 Shall we begin at the beginning and talk about Volume 1 first?  University of California Press, 2010, 730 pages, this massive hardcover is a pleasure to behold.  It has a very strong sewn and glued binding, durable black spine cloth, and paper-covered boards, and is printed on real paper.  Reading it is a physical experience.  I needed a strong reading lamp and a lap pillow, because the font is slightly too small for comfort and the book is far to heavy to hold in your bare hands for long.

As for content, well, what doesn't this book contain, I wonder.  His intent was to dictate whatever he happened to be thinking about on a given day - what interested and electrified him that very morning, and make that the topic at hand.  Thus the text is not chronological, or any kind of -logical, but instead meanders from his distant past to the news of the day - literally a newspaper clipping or story he wanted to comment on, or a letter in the mail that released a flurry of meaningful associations for him, and took precedence over anything else. So, not like Tristram Shandy, exactly - much more legible and readerly, is that a word? - but not like anything else I've ever read, either.  I'm sorry if this is old news to everyone but me, I didn't know until I started reading.  He was convinced that in this apparent disorder, he'd finally found the perfect form to get his autiobiography down, after years of false starts.  He obviously loves this discursive format.  It suits him, and he revels in it (p.278):

"I don't mind excursioning around in an autobiography - there is plenty of room.  I don't mind it so long as I get the things right at last, when they are important."

"In this autobiography it is my purpose to wander whenever I please and come back when I get ready."

As soon as he tires of a topic, he drops it like a hot potato and is on to something else.  This continues for hundreds of pages.  The results are fresh and alive.  And by some alchemy, soon his narrative does knit together, and does not seem disjointed in the least, and we come to love him because he is speaking just as we think.  Which is more or less all over the place, about everything, every damn day (pp.256-257):

"...the events of life are mainly small events - they only seem large when we are close to them.  By and by they settle down and we see that one doesn't show above another.  They are all about one general low altitude, and inconsequential.... life does not consist mainly - or even largely - of facts and happenings.  It consists mainly of the storm of thoughts that is forever blowing through one's head.  Could you set them down stenographically?  No.  Fifteen stenographers hard at work couldn't keep up.  Therefore a full autobiography has never been written, and it never will be....if I had been doing my whole autobiographical duty ever since my youth all the library buildings on the earth could not contain the results."

I believe him.  His topics range from his childhood, through times in the west and overseas, to his marriage and children, his terrible business decisions and his fine ones, his books, friends, cats, triumphs, disasters, and the news of the day.  A book like this could never be complete.  It takes place in an eternal present.  And he is frank, to say the least - he intended that most of what he said would not be published until long after his death, and the deaths of everyone he was speaking so frankly about, and their children.  He didn't want to cause anyone pain, but he had to have his say.  And what a say it is.  He is scathing one moment, and unbearably tender the next.  He roasts enemies over hot coals, then forgives them.  The cumulative results are totally disarming.

This is enough for now.  More on Volume 2 to follow, soon, I'm finishing up reading the explanatory notes today.  Then I begin the first six volumes of his complete Letters.  And a few of his travel narratives are waiting in the wings.  Hey, it looks like I found my winter reading project!


On my mind this New Year's Day, the inimitable Samuel Clemens.  I just finished reading the Autobiography of Mark Twain Volume 1 (p.355):

"In my early manhood, and in middle-life, I used to vex myself with reforms, every now and then.  And I never had occasion to regret these divergencies, for whether the resulting deprivations were long or short, the rewarding pleasure which I got out of the vice when I returned to it, always paid me for all that it cost."

So much for resolutions!  Make them, and break them, lovingly.